Reggie Walks in the Woods

Reggie Black told me a funny story the other day; something from long ago.  I said “Reggie!  Why were you always walking alone in the woods?”  He said “why were you always alone in your room?”  Well, that settled that and I asked Reggie if he would kindly write the story.  He obliges us today with what appears to be part one of two or three…

I took a walk in the woods.

It was a long time ago.  Maybe I was in middle school, but I think I was in high school.  Why I took this walk, I can’t remember.  I used to have a bedazzling crush on a girl over the other side of town, maybe I started that direction down the railroad tracks before I found something more interesting.

There was still snow on the ground, although the weather was warming. 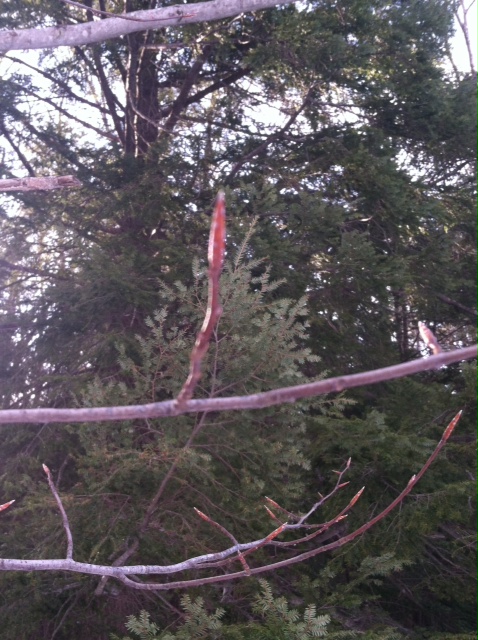 On the roads the snow left only wet gravel to be remembered by, but it was still deeply piled alongside and I wore my winter boots.  I think I still have those same boots, but they haven’t seen much snow in decades.  The sun made me warm, and I walked with an open coat.

I strode the unused railroad tracks beside the Androscoggin and crossed the Sabattus on that old railroad trestle.  Now facing the proverbial fork in the road, I chose to follow River Road and keep the larger Androscoggin to my left.  The railroad tracks were the shortest path to my be-crushed and I had followed them many times in summer on my bike, but now the road had the greater appeal.

I wound up the slight grade past the junkyard to my left, and then the farm to my right.  I thought the road continued all the way on down to Southwest Bend, the sharp left hook in the river where a ferry used to run to the town of Durham on the other side.  To my surprise, it didn’t, but the road did continue as a broad path used by snowmobilers in the winter.  ATVs weren’t around then, but they likely ride it in the summer nowadays.

I pressed on through the snow piled up by plows before they turned around, and found myself on a smooth, dry lane running slowly downhill under high, shady pines.  To me, those pines were old, old as the river.  I know now that they are “new” growth, maybe as old as fifty years, but that pines are the trees that grow fastest in overtaking old pastures and clearings.  Once, when horses and cows needed to be fed all winter, this was all pasture.  Now the pines have claimed it, and their needles warded off most rivals, leaving only the clean, dry ground below.  Competing for light, the canopies were high and all the lower branches had fallen off long ago.

The lane got narrower and more wet until it was impassable, and I decided to turn uphill and get back to Ferry Road.  The ground was nearly snowless under the trees, and to my surprise I stumbled upon the foundation of a house long gone.  It was a fairly large house compared to the foundations of other old farmhouses I had found in the woods.  It faced out towards the river, looking out over the old Ferry Road that I had been on.  Above it, a driveway descended from the new Ferry Road fifty yards away, gracefully lined with tall pines in neat lines.

I wondered who had lived there once, and I felt like I was trespassing.  How long had the house been gone, likely burned down?  Were there, like the ghosts in Our Town, spirits that still recalled the great joys of the living, of harvest dances and newly ironed dresses?  The house sat right on a spring, the source of the water that cut off my path up the lane.  The ferry itself was only a little beyond it, once the only way of crossing the river to Durham, and from there either down into Lisbon or north to Lewiston.  Not much would have passed this house unobserved.

Concerned the darkness would catch me there, I followed the tree-lined drive up to the road, clambered over the banks, and started right, away from the bend and back towards town.  The road was shaded by the pines as the sun dipped a bit, but it was not long past mid-day and the road was bright by comparison to the woods I had just left.

It was on that road I encountered an Opel coupe with tinted windows, probably the only one in Maine and which I had seen before in passing.  This time, I would get to know it and its driver far more than I wanted to.

This entry was posted in Reggie Black and tagged Androscoggin River, Our Town, Sabattus River, walking in the woods. Bookmark the permalink.
Loading Comments...
%d bloggers like this: