I haven’t talked about the weather much lately but we’ve had warmer than normal November days with temperatures hovering in the mid-fifties.  This week of warming, following the end of October’s freezing temperatures caused the leaves to shower to the ground in late afternoon ballet.  Illuminated by the afternoon sun, the leaves would be beautiful if they weren’t a reminder of what will come.

Schmaltzy, I know, but there is a George Winston feel to all of it with the day’s light and shadows moving around the house.  The kitchen is much brighter at the afternoon coffee break and I often wish I could stand at the sink washing dishes and drinking coffee until dark.  This picture is a feeble attempt to capture the scene. 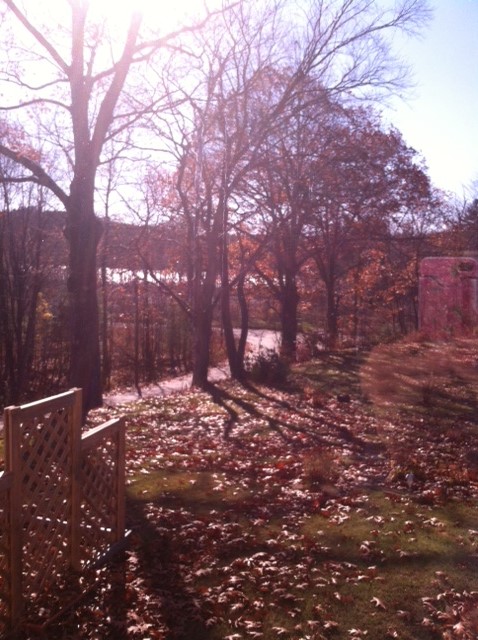 Yesterday, the local paper ran a piece I wrote about a food event in Lewiston.  I made the Brussels sprout salad featured in the article and served it with dinner after Handy and I got home from the Basilica.  The Maine Friends of Music performed a “Baroque and Beyond” concert which was perfect for the day and the season.  The harpsichord trumps George Winston’s piano in my afternoon book of comparisons.  In spite of the perfect and orderly sounds of Vivaldi, Bach, and Scarlatti we’d heard, we ate dinner quietly with only a brief exchange of contempt about the tyranny of the time change.  Handy asked what type of food experiment he should try next and I said I didn’t know.

We are descending into our autumnal torpor here in New England. Raking leaves should be a good antidote for what ails us, those seeming million mundane motions.

Ah, there’s the clunk of the newspaper being chucked at my porch.

This entry was posted in Weather and Seasons and tagged a million mundane motions, Maine Friends of Music, Raking leaves, time change. Bookmark the permalink.
Loading Comments...
%d bloggers like this: