The Eternal Rest of Marigolds

These Red Marietta marigolds were the last plants in the big home garden I share with Uncle Bob.

I didn’t want to pull them out, but I knew they were approaching the end of their days.

Uncle Bob said he would do it for me; I didn’t think he should be working too hard, what with the “stitches” in his head.  He acted like his accident was nothing, but I saw his Florence Nightingale at the credit union and she told me more of the story.

Lazily, I started pulling the plants out of the soft, damp earth.  I saved a few seed heads and put them up in the barn to dry.  While I was ding-toeing around, Uncle Bob came out and said “I’ll drive the truck around so you can load them right up.  No sense handling them twice.”

That was Uncle Bob’s way of saying “get a move on and pull those out; I want to roto-till the garden.”

I did have to wipe a little tear from the corner of my eye, though.  Then I remembered it was the first day of autumn and Uncle Bob was fine and there would be other outside things to do in the garden.  I got a move on and finished the job. 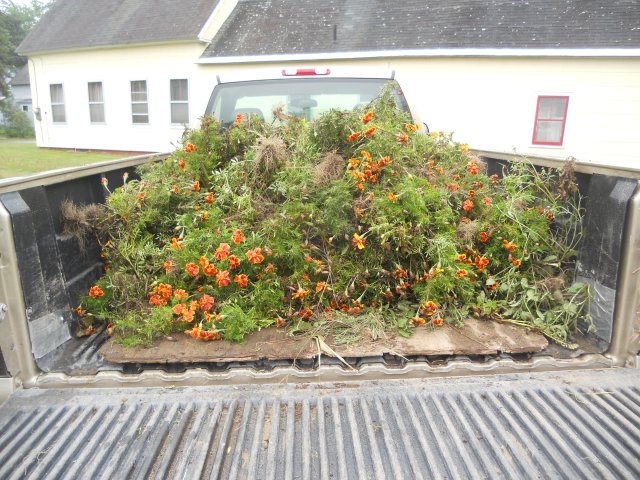 “Consider the lilies how they grow: they toil not, they spin not; and yet I say unto you, that Solomon in all his glory was not arrayed like one of these.”  Luke 12:27, King James Version.

Peace and rest to you today!

This entry was posted in Today We Rest and tagged Garden Clean Up, Luke 12:27, marigolds, Uncle Bob. Bookmark the permalink.
Loading Comments...
Comment
×