The Funniest People I Know

If I had a nickel for every time someone said “You’re so funny” I’d be…Kyle Bass!

When I hear this, I can’t help but smile a little bit to myself; then I say “Look, I have to be honest, I’m not that funny.  Everything I say is just borrowed material from all my funny friends. If you think I’m funny, you should meet my friend (insert name of funny friend here).”

Still, at least once a day, I hear “You are so funny.”

Today, I’ve decided it’s time to give credit where credit is due and reveal to you a few of the people who have helped me to become the hilarious person everyone thinks I am.  Naturally, some of the names have been changed to protect the innocent.

I’ll start at the root of the tree.  My father is a pretty funny guy and if you were to look at his high school yearbook, the 1951 Lisbonian, you would find many pictures of him making faces. His youthful humor was not confined to smirks and raised eyebrows, though.  No, just spend a few hours with Herman the German and his high school best buddy Mert Robinson.  Apparently, they liked to keep people laughing by using fake names when they were out of town, going by their movie star names “Roger Farrington” and “Herbie Blackstone.”  I’m not sure why they needed to disguise themselves; maybe it was because they spent a lot of time at a dance club called “Purgatory.”  I promise to write a post about them when I get the rest of the story. 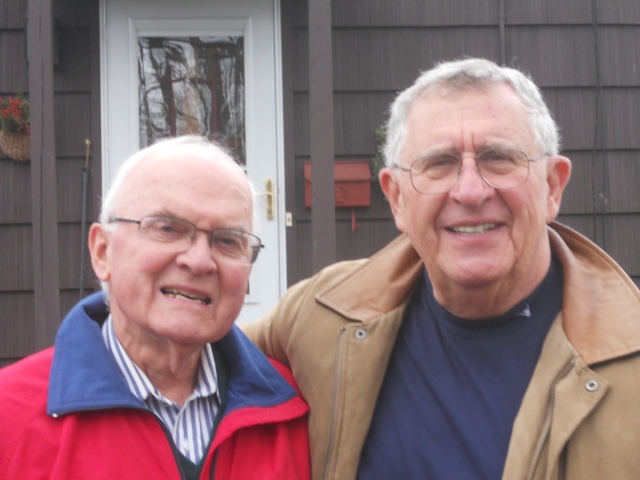 Things really got cooking in college, though.  I realized I was part of a giddy group the day ten or so of us decided to sunbathe on a paved parking lot in back of the Stewart Commons cafeteria. It was my friend T Bone who first spotted the dead animal carcass just a few feet from our makeshift tropical island and she said “We have arrived on Carcass Beach.”  T Bone was also the first of the bronzed crowd to say “Burn today, tan tomorrow.”

Then there was Shelley; we were roommates for the one semester we lived off campus.  Shelley taught me that if one was really exhausted, one was “stoopid with fatigue.”  One of her funniest lines, though, was when she would dramatically proclaim she hated something with the “white hot intensity of a thousand burning suns.”

After college, in the Big Corporation up North, I met Jaxon and Zino.  One day, there was a solar eclipse and everyone was gathering around the windows with homemade eclipse viewers.  Zino had his back to us, gazing up at the sun.  All of a sudden, he said “don’t look directly at it” and turned around to face us.  He had taped red paper circles to his eyes and for a very brief moment, it looked like he had burned his eyes out staring at the sun.

Naturally, everyone laughed but no one laughed harder than Jaxon, who was doubled over and shaking.  Zino looked at me and said “he’ll laugh at anything we say.  What is wrong with him?  We could say ‘ketchup’ and he’d laugh.”

Jaxon started laughing even harder; did he soil himself?  I don’t know.   Zino and I looked at each other with a knowing look (The Look) and from that day on we called Jaxon “Ketchup.”  Over the years, Jaxon has developed his own brand of subtle humor, perhaps because he’s watched every episode of “I Love Lucy” four times.  A moment of silence is requested, though, for his Fred Mertz Christmas tree ornament which fell off his tree and broke this year.

Speaking of silence, I sometimes use the “uncomfortable moment of silence” as a comedy tool.  I certainly did not make that one up myself; I learned it from yet another crazy co-worker who sat in a neighboring cubicle.  We’ll have to call him John Doe because he’s quite successful in that northern town these days.  I used to listen to everything he said, trying to pick up a few customer-soothing lines.  I even wrote some of the most effective ones down on index cards, just in case I forgot them.  If I had to make a really difficult call, I would line up a few index cards in front of my phone before I started dialing.

My technique must have been missing something because one day, John Doe said “Jabbie, sometimes you’ve got to stop talking and let silence speak for you.  When someone is pushing your buttons, don’t say anything.  Count to three.  Then, deliver your lines.  It’s ‘the uncomfortable moment of silence.’”

It’s true.  The “uncomfortable moment of silence” is effective, both during difficult conversations and funny ones.  Try launching a word like “apocalypse” after a long and dramatic silence.  Just last night, one of my co-workers was telling me there was going to be a dreaded assessment at her condominium complex; I couldn’t quite help myself.  After a three-second pause in which I pondered thoughtfully, I looked her straight in the eye and said “Oh no!  I guess you’ll need to dip into your apocalypse fund, won’t you?”

Peals of laughter followed and it’s not even that funny.

Someone once said that laughter is the best medicine and although I’m not sure that’s true, I do love it when people laugh at the things I’ve said.  Just remember, none of it is original material and all my thanks go to my funny family and friends, many of whom I couldn’t include in this brief blog post.

1 Response to The Funniest People I Know