When I was 12, I remember seeing Rocky Balboa (played by Sylvester Stallone) run up the stairs of the Philadelphia Museum of Art.  It was exciting (“Gonna Fly Now”).  I don’t know if the 1976 movie started a stair climbing craze.  The StairMaster was invented in 1983, although as early as 1796 some enterprising genius invented an exercise machine called the “Gymnasticon.”

I’m not a big fan of “going to the gym.”  Don’t get me wrong; I’ve belonged to a number of health clubs, gyms, and weight rooms in my life.  When gyms added Tee Vee banks, I knew the gig was up for me.  Life was stressful enough without going to a place where I would run in place like a gerbil on a wheel AND watch news puppets telling me this and that.  I have great admiration for people who have the mental and physical discipline to adhere to such a regular gymnasium regimen.

Walking up inclines and hills is very good exercise for the heart and the bones.  When I’m at home, I have a variety of hills to walk up, including Maple Street, Summer Street, and High Street.  I can also walk over the The Farm and climb Mosquito Hill when I’m stomping around.

Stair climbing has been an effective alternative, especially when I’m at The Big Corporation.  It’s always invigorating to get up, run up three flights of stairs, and jump around a little bit.  Since we’ve moved to the new location, though, we only have two flights of stairs.  It’s not so invigorating.  We also share the building with other Big Corporations and we’re just getting to know each other.

Last week when I was taking my Sunday drive, I happened to look to my left and saw this fantastic stair-climbing opportunity. 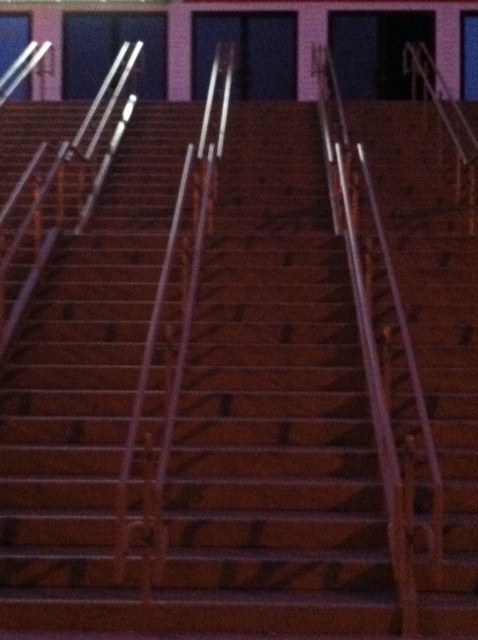 It’s 30 steps up and 30 steps down; I counted my steps this morning and by the time I was finished, I’d ascended and descended a total of 1320 steps.  It’s safe, too, because it’s right across the street from the police station.  Sometimes, one of the neighbors comes out on their porch to smoke a cigarette; I wave so they know I’m friendly and maybe they’ll look out for me.

It’s not Maple Street, with its long and gradual climb from the library to The Tomb and then down to my Surprise Garden, but it will have to do until I can get back home.  It’s also a good reminder that every journey in life starts with one step; sometimes up and sometimes down.  What would Helen say?  Oh, yes…”practice makes perfect!”

Step it up (and down) today!

This entry was posted in Experiments and Challenges and tagged Gymnasticon, Rocky Balboa, Stair climbing, Sylvester Stallone, The journey of life. Bookmark the permalink.
Loading Comments...
%d bloggers like this: