You Wreck Me, Baby

The subject of bumper stickers has come up on this blog before; I get a kick out of them.  Mostly, they make me laugh because they are impotent to affect change.  I have 3 stickers on my car and while they make me feel good, I’m not naïve enough to think they change the world, someone’s mind, or a vote.

One sticker I see on Seacoast cars says “No Idling.”  I’ve searched the web and have not found what organization provides the particular stickers I’ve seen.  According to this minimal and anonymous website, the idea behind the “no idling” campaign is that an idling automobile increases pollution, wastes fuel, and increases wear and tear on an engine.  School drop-off zones, ATMs, and drive-through food services are popular targets for the ire of the no idlers.

I’m sure the no idlers are perfectly lovely people.  Unfortunately, our modern American infrastructure was built on the idea that there would be limitless cheap oil forever and that’s why it’s dangerous to park the car and go into the Lafayette Road McDonald’s in Portsmouth.  My bank’s Lafayette Road branch is also unfriendly to a “park and shop” customer like me.

Last night I was tired and hungry.  I’d worked late at The Big Corporation and was meandering home in the Jeep, contemplating something simple and comforting for dinner.  A memory of a McDonald’s French fry crossed my mind and I veered off towards the location on the corner of Lafayette and Mirona Roads, an asphalt scar on the earth if there ever was one.  I parked my car in the large and empty parking lot and dodged my way through the careening automobiles lining up to idle for their supper.  In spite of the spacious invitation to park and dine, the drive-through line circles the restaurant and makes it difficult for pedestrians to enter the facility. 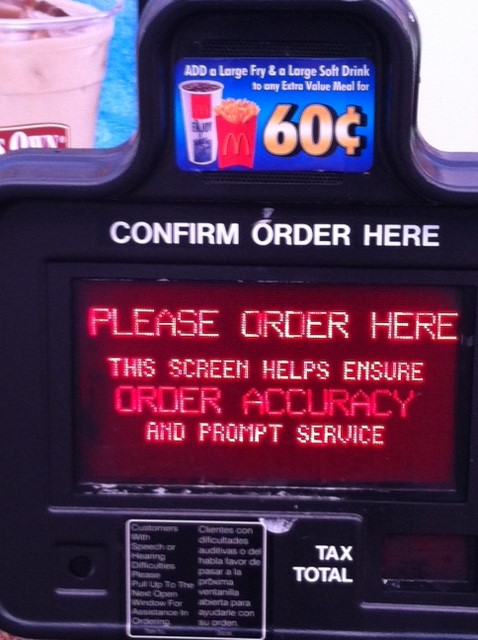 Once I gained access to the restaurant, it was a typical mid-sized McDonald’s with one lonely evening diner and no one working the counter.  All hands were on the drive-through deck.  After about a minute of waiting, someone shambled over, greeted me resentfully, and took my order.

“May I have a large order of French fries?”

“That will be two minutes.”

I noticed two containers of French fries sitting in the fry carousel.  I pointed over to them and said,

“Are those French fries for sale?”

The employee looked at me and said,

“Those are for someone at the drive-through.”

Hungry and tired as I was in my first world way, I knew nothing good was going to happen if I didn’t turn away from the counter gracefully.   I was either going to pull a John Kerry (“do you know who I am”) or demand to see the manager.  The baseball game was on in the safety of the Jeep, so I decided to walk away from pending trouble at the counter this time.  I weighed the French fries in the crucible of grace and grace won.  No heavenly hosts and angels were flying around my head, though, because I still felt ugly inside.  I walked through the dining area toward the rear exit and heard the nasal sounds of a favorite Tom Petty tune sinking into the plastic booth seats from some hidden speaker.

I should have known better than to take my tired soul to the golden arches for refreshment.  It wouldn’t be the first time I’d been disappointed.  Tuesday night, it almost wrecked me.

If I had more time, I might begin a one woman rampage against the anti-pedestrian antics of the world’s largest hamburger chain.  Such things take time, though, and who am I to wage such a battle?  I’m just a lonely blogger, drifting around the Seacoast suburban sprawl in a Jeep Grand Cherokee looking for a French fry and getting some tired Tom Petty lyrics.  I’m one person against billions and billions served.

The no-idlers will have to take on McDonald’s this year.

This entry was posted in Experiments and Challenges and tagged first world hunger, is there a cure for world weariness?, McDonald's, Tom Petty. Bookmark the permalink.

1 Response to You Wreck Me, Baby