Some Pearls of Great Price

If a person were to read this blog diligently every day he or she might get the notion that I have spent time reading The Holy Bible. That notion would be correct. I also studied this book as literature in college. Being imperfect and prone to error, I have no desire to tarnish the wisdom and beauty of The Holy Bible by attempting to interpret any passage. Surely I would fail.

Some passages of scripture are beautiful even to a non-believer. One such passage is the Parable of the Pearl. Jesus says:

“Again, the kingdom of heaven is like unto a merchant man, seeking goodly pearls: Who, when he had found one pearl of great price, went and sold all that he had, and bought it.” Matthew 14:45-46, KJV

This parable is straightforward; Jesus is talking about heaven. These verses also remind me of the precious nature of friendship. A good friend is like a precious pearl and I have been fortunate to have had a great many friends in my life. I haven’t always been a good friend in return; I am thankful so many of my friends are forgiving and I’m grateful I have been given a little bit of insight in my “old age” to see my flaws and try to be a better friend.

When I was asked to be the co-chair of the Junior League of Boston’s 2005 Decorator Show House, I was thrilled. Being the co-chair of such a prestigious event as “Show House” was the pinnacle of my Junior League experience. I didn’t know my co-chair very well and nothing in our life experiences should have brought us closer than rubbing elbows at a Neiman Marcus cosmetics counter. She is very smart, very determined, and incredibly fair. She has her Ph.D., she’s walked across Spain, and I’ve never heard her say a disparaging remark about anyone except George W. Bush.

In spite of having an uber competent and motivated co-chair, the project was one of the most difficult things I have ever done. It took every bit of energy and will I had and there was one day when things were not going very well and I had had enough. I had taken the day off and was working on “Show House” from home. I was on a conference call with my co-chair and the President of the Junior League.

I was wearing a string of faux pearls. It was all I could afford at the time.

I have no idea what we were talking about, maybe a budget or a piece of marketing material. I felt insecure about my contributions to the project and I was tired and overwhelmed. All of a sudden, I yanked hard at the necklace in frustration and it broke. The faux pearls went skittering across the floor.

As my mother might say, “the show must go on” and with the help of my co-chair, I was able to refocus my energy and carry on. In retrospect, I learned a lot about the corrosive power of insecurity. Even though no one on the project had judged me, I was judging myself against some impossible standard of perfection and coming up short.

My co-chair never gave up on me, though, so once I’d gotten a week’s worth of sleep, we started back on the project like we were storming the beaches of Normandy. Her husband even encouraged us with the lines from Winston Churchill’s “we shall fight on the beaches” speech.

We worked very hard on the project all the time and slowly, my co-chair became my friend.

One late February afternoon, we took a break from our work. My friend’s two young daughters had gotten up from their naps and wanted someone to make them chocolate chip cookies.

“Let’s do it together,” I said to my friend’s four year old daughter. We started gathering the ingredients, including an exquisite Sharffen Berger dark chocolate baking bar.

“We’ll need some aprons, some spoons, and a big mixing bowl.”

After we assembled all the ingredients and tools on the kitchen island, I noticed the mixing bowl was still missing. I asked my friend how she proposed to mix up the batter and she said

“I have a stand mixer. I’ll go and get it from the pantry.” 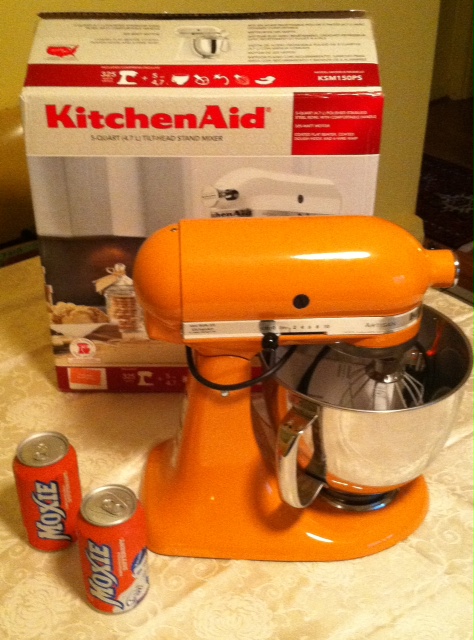 Other than grating up the chocolate, making chocolate chip cookies on that snowy February day could not have been easier. The stand mixer did all the work in about eight minutes. We were enjoying milk and cookies in no time. Driving home later, I thought long and hard about the purchase of such a magnificent machine. The only problem I could see was its size; it just wouldn’t fit anywhere on my chicken coop-sized condo kitchen counter and that was the end of that. I vowed that one day I would have a kitchen big enough for a KitchenAid stand mixer, a few good friends, and some chocolate chip cookies.

Eight years later and my Show House co-chair and friend, who I affectionately call my JLB BFF here on the blog, was selected to be the President of the Junior League in 2014. She is going to be a dynamite President and she’ll inspire other people to do their best work, just like she inspired me.

I’m still living in my tiny condo and I’m busy running a recipe contest in my hometown. I still don’t have room for a stand mixer and I’ve never replaced those faux pearls I used to wear as a security blanket. I have a lot of good friends, though, and they’re better than any real or faux string of pearls. They’re the pearls of great price I wear around my heart.

Working on the Moxie Recipe Contest has been a fun and easy project. Almost everyone I’ve asked to help has said “sure!” Just like that. Some people have gone out of their way to help and some have offered to do things without my even asking. I haven’t had to revisit any Winston Churchill speeches for inspiration. I learned a lot from my JLB BFF back in 2005 and I bring that knowledge into every project I do today.

Life is better when people believe in you and give you second and third chances.

The Moxie Recipe Contest takes place on Friday, July 12, 2013 at Chummy’s Midtown Diner on Route 196 in Lisbon Falls. For more information about the judges, the prizes, and the rules, click here.

Everyone who participates in the contest will be entered into a drawing for a KitchenAid 5-quart stand mixer. It’s orange, of course.

2 Responses to Some Pearls of Great Price