Uncle Bob and I had a garden chat yesterday afternoon.  He seemed a little down; he predicted an end to the garden.

Uncle Bob keeps garden records on his kitchen calendar and saves his calendars from year to year.  He’s quite a statistician.  He said his cucumber production is down two-thirds from last year and he’s only got two pumpkins coming.  He’s not talking about the corn yet.

On a brighter note, he’s been eating string beans every day for over a month.

I decided to cheer him up. 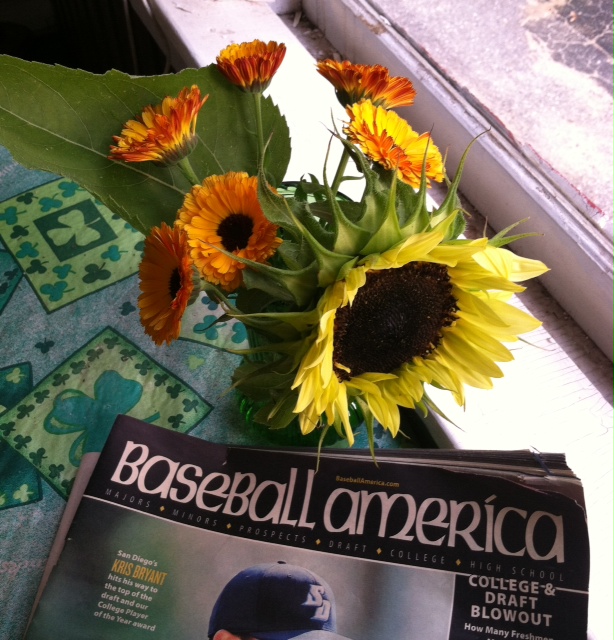 My sunflowers are growing tall.  I picked one for Uncle Bob and put them in a vase on his porch.  He’s so funny; these flowers will dry up and die and he’ll leave them there until I come home to refresh them.

As I was arranging his flowers, I noticed he had a current issue of Baseball America on the table.  The publication’s motto is “Baseball news you can’t find anywhere else.”  Sometimes, I forget that Uncle Bob is a real person with passions and interests.  He’s not just a character on my blog.

Baseball is one of his passions.

I think he’s pretty good with numbers and number patterns, too.  If he’d been born at a different time or place, maybe he would have been a statistician or a hedge fund owner, creating some exotic string bean algorithm to produce great wealth for a select few.

It didn’t work out that way for Uncle Bob, but I’d say his life has been pretty rich.

2 Responses to Baseball and Sunflowers America