I’ve been sorting through some old papers and albums for a few weeks.  On Labor Day, I sifted through two boxes of photographs and ephemera.  Back in “those days” cameras and photography were different; the likelihood of a poor picture was much greater, evidenced by the multitude of blurry ones I threw out.

It was late afternoon.

A nap would have been good, but I found a half-filled album from my wedding in 1995.  There were pictures and cards and the “Just Married” sign my friend Shelley made.  Looking at the date on a card, I realized eighteen years to the day had passed since I got married.

It was a “non-traditional” wedding.  A small group of friends gathered at my fiancé’s camp in Avon, Maine.  We drove over to Weld and started hiking up Little Jackson, on the other side of Tumbledown Mountain.  It was a day for hiking.  When we got to a scenic vista nestled in the boulders and scrub pines, someone read a few poems and Shelley’s sister, a lawyer, married us.  Then we hiked down the mountain with the “Just Married” sign and some Budweiser cans on my husband’s knapsack.

We had a barbecue, a bonfire, and a delicious wedding cake with a traditional bride and groom on the top. 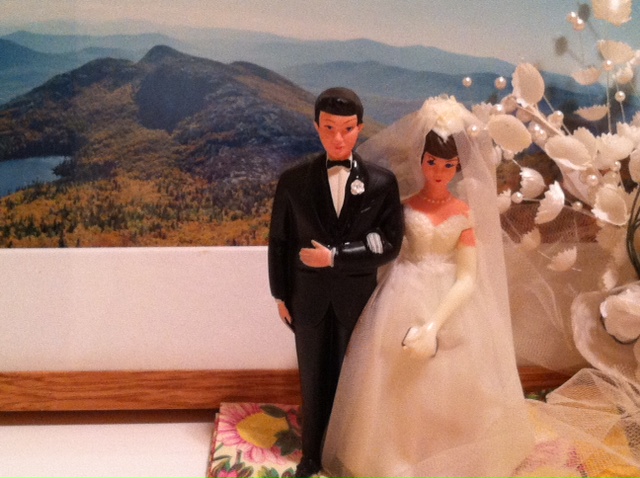 What does one do with these things?  Write a story?  A blog post?

How does one write about the pain of regret, immaturity, and dreams that were never meant to be?  Does writing about it in public make it less sacred?  Only in very long retrospect do I see how little I thought about the consequences of my actions.  I’m glad I’ve learned things in the years since my divorce, but I always wonder if there could have been a less painful path for everyone if different decisions were made long ago.

There’s an old adage Libertarians like to use, something about “your right to swing your arms around ends where my nose begins” and I’ve thought long and hard about these words in the last decade or so.  When I was young and foolish, they wouldn’t have made sense to me.  I was a free woman and I could do what I liked.  Is that your nose?  Too bad.

I see things differently now, most of the time.  Not perfectly, but I can see value to learning where my literal and figurative arms end.  Some days it just means I don’t flip the bird to the person who cuts me off in traffic.  If I had understood this idea in 1995, I might have thought “well, I want to get married, but I’m not sure I want to stay married to this person, so maybe the best course of action is to not get married.  Then I won’t punch this kind man in the nose.”

I swung my arms to and fro.  What nose?

Life is complicated and messy; whoever told us it wouldn’t be this way was wrong.  Marriage and divorce is funny and exciting on reality Tee Vee shows, but in real life it’s sad and painful.  I’ll spare my readers the clichés and quotations about regret.  That’s not my shtick.  I’m just telling stories.

Speaking of which, remind me to tell you about the time I worked at a bridal boutique when I first moved to the Seacoast.  Until then, I’m putting my small pile of wedding mementos in a small box with the cake topper.

I’ll hang the framed photograph of Tumbledown Mountain in my new “Coop” to remember that life’s beauty is out there somewhere.

It’s a lot easier to see it when I’m not swinging my arms around haphazardly.

4 Responses to The Cake Topper