(Today’s post, Thanksgiving dinner from the land of perpetual sunshine, is courtesy of Reggie Black.  I’m thankful for Reggie’s contribution today and even though I’m not out shopping, this makes it officially “Black Friday” here on the blog…”Reggie Black Friday.”)

She didn’t get home as early as planned from her mother’s, which made her late getting a start on Thanksgiving dinner.  Fortunately, I discovered that a rolling Igloo cooler filled with hot water from the shower does wonders to defrost a frozen turkey.  I put the bird in late yesterday afternoon, and this morning the bird was soft and the water still warm.  At least she would have a ready turkey to work with.

Instead, her first job was dessert; the girl has her priorities.  She made strawberry pie from local strawberries, dicing them up, putting them in a baked crust and then pouring a boiled sugar sauce with a little corn starch over them.  Into the freezer to set up, and on to bigger things.

A few years ago we started cooking the turkey using very high heat, breast down and sealed in foil so the juices don’t escape.  We learned to leave the cavity of the bird open so the high heat cooks from the inside out.  This year, she tried leaving the bird uncovered and turning it from side to side every twenty minutes for the first hour and a half before finally leaving it breast up for the final baking.

Outside I tended to the autumn cucumbers, stringing them up to a mesh they will climb.  Her autumn squash are covered with blossoms, the spinach is growing, the arugula is ready for our salads and the mustard greens and lettuce are right behind.  It’s probably about time to start pulling the sweet potatoes out back, too.

Despite occasional calls for help turning the bird, my son and I worked on getting the rust off of our tools.  I trained him how to brush the rust off and use naval jelly on a shovel gone badly rusty.  He worked hard at it, but the poor quality metal in the shovel might not be salvageable.  He turned the compost heap which has shrunk to half its starting size, even though we keep adding kitchen scraps to it.  I showed him the rich black compost forming down below, and he was pleased to see his work rewarded.

While our white cat followed us around outside and my daughter worked steadily in the kitchen inside, I was struck by how quiet this Thanksgiving was.  There was no noise.  Every other day of the week some lawnmower, some leaf blower, some zero-turn grass cutter with a budding Dale Earnhardt at the wheel can be heard grating and blasting nearby, but not today.  It was very peaceful.

I feared the turkey would be dry, but it was done perfectly.  She succeeded again.  Mashed potatoes, turkey gravy, dressing.  Where’s the vegetable?  Her eyes turned skyward and she whistled.  She even made a cinnamon buttered sweet potato for me.  He, meanwhile, becoming more aware of where our food comes from, commented that our turkey probably didn’t get to express its turkey-ness much in life.

Through dinner they quizzed me about Sparta, Athens and the Persians.  I told them about Xenophon’s Anabasis, the ambushed Greek army deep in Persian territory (now Turkey) and their long fight to reach Greece again.  I reminded them that Leonidas and his men sacrificed themselves to hold back the Persian army long enough for the rest of Greece to mobilize and ultimately defeat the Persian invaders.  We also discussed the imperial overreach of democratic Athens, and how it ultimately led to Athens’ fall.

“Do you remember going to Sicily?” I asked, and they did.  “Do you remember going to that quarry in Syracuse, the one with the cave in the rear that carried sound perfectly up to the king so he could spy on his prisoners?”  They did.  “That was where the Athenian army that invaded Syracuse ended up after surrendering, left to starve to death in that quarry.”  Their eyes opened wide.

How did we get on ancient Greece?  Because I was reminding them that ancient peoples, and even the bushmen of Africa and the aborigines of Australia, had far more rigorous tests, far more knowledge to learn, than children of today have to pass to become adults in their societies.  “Remember the beginning of 300, and Leonidas out in the wild facing the wolf?”  And we were off from there, all over ancient Greece.

It was a wonderful Thanksgiving.  This was not the first Thanksgiving dinner she has cooked entirely by herself, and she normally cooks our household dinner more than once every week. 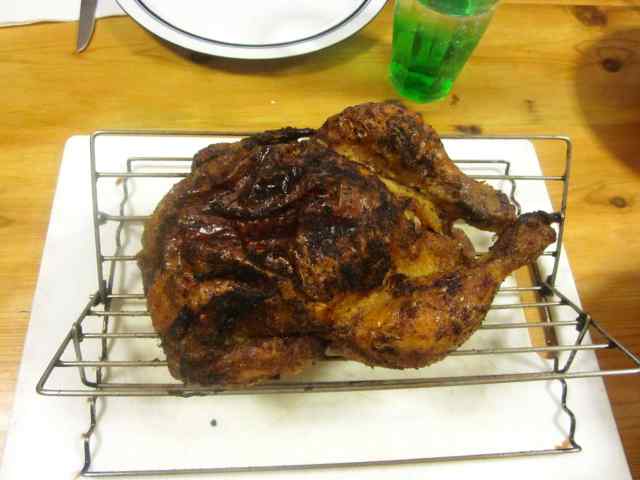 This entry was posted in Reggie Black and tagged ancient Greece, how children learn, Thanksgiving in Florida, turkey. Bookmark the permalink.

4 Responses to A Reggie Black Friday