(Gratefully, my little corner of northern New England was spared from a damaging ice storm this weekend.  While there was the usual weather puppetry and foreboding, the failure of the ice storm to deliver a sharp, disabling punch to the area disappointed many in the virtual world.  Although almost everything was cancelled, it could have been worse.  It wasn’t;  “Amen” to that.)

While glancing through the holiday music section at Bull Moose Records in Portsmouth the other day, I found this interesting three dollar CD. 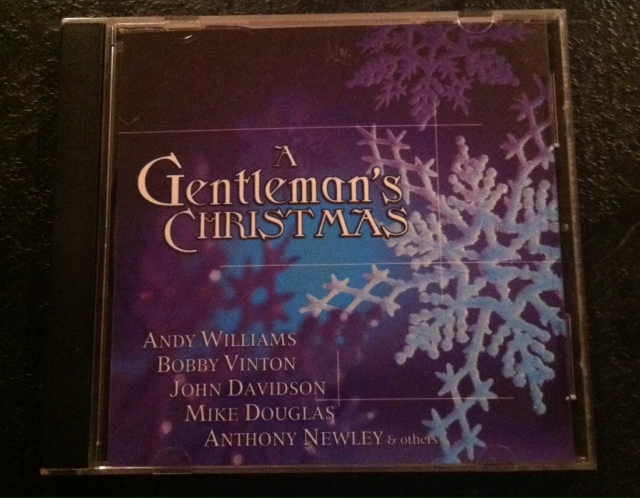 I bought it as a joke gift for my friend Jaxon.  He’s a real gentleman and I knew he’d get a kick out of it.  I even texted him from the store to tell him I had found the perfect gift for him.  Like the gentleman he is, he texted back promptly “honestly, you mustn’t buy me any gifts!”

I was skeptical about the CD, but given the price, what did I have to lose?  It would all be my gentleman friend’s gain.

When I got home, I should have wrapped up the CD for holiday mailing to Jaxon, but I decided to give it a spin.  I was pleasantly surprised at the selection of songs and the gentlemanly renderings.  Some of the singers would be well-known to men and women of about my age; Andy Williams, Bobby Vinton, and John Davidson (Hollywood Squares, anyone?)  The CD also included two beautiful pieces by opera singers of a different time, James McCracken and Robert Merrill.  Mike Douglas, not to be confused with Gordon Gekko, contributed a solid arrangement of Ave Maria and Canada’s own Robert Goulet added a beautiful version of Panis Angelicus.

In the triumvirate of gentlemanly Christmas singers, Bing Crosby and Frank Sinatra are considered by one now silent blogger as the leaders of the pack, with Dean Martin and Nat King Cole neck and neck for the third place spot.  I have CDs by all of them, but after picking up my three dollar copy of A Gentleman’s Christmas, I’m reconsidering my holiday music selections.

Jaxon, I hope you don’t mind, but I’ll be sending this along after Christmas.

This entry was posted in Weather and Seasons and tagged A Gentleman's Christmas, Andy Williams, manly music to fill the house, Mike Douglas, Robert Goulet. Bookmark the permalink.

1 Response to A Gentleman’s Christmas