A few weeks ago, I had a conversation with one of my friends, Eleanor.  I had asked her about her Christmas plans.  It turned out to be a very long story, but I had time to listen and I did.  One of Eleanor’s sisters was hosting the holiday event in Essex and the rest of the brothers and sisters would travel long distances with sleeping bags and casseroles to make merry.  The hosting sister, Grace, lived in a historic home, with an elegant living room and a large fireplace; it was so old-timey that she didn’t want to change the venue even though it was complicated for everyone to get there.  Eleanor said her family had been performing this traveling Christmas ritual since their mother died; it was a lot of work for everyone but there had never been a good time to change the plans.

Eleanor said “Grace thinks she owns Christmas now that our mother is gone.”

Eleanor’s story contained a few disagreements and arguments; Christmas was cancelled for a time and angry words were exchanged.  The last I had heard from Eleanor, she was planning to eat a cup of gruel alone and wait for the spirits of Christmas past, present, and future to descend on her home.

What could I say?  In our modern world, December has become the month of unmet expectations.

I may have overstepped my bounds but I told Eleanor “Grace is living in her own Christmas fantasy.  Why must it be this way?”

I was hard on Grace and I should have kept my thoughts to myself.  As it turned out, I was working on my own mental Christmas fantasia.

I was planning to host my immediate family and Uncle Bob here at my new home.  I had an interesting menu planned and had been making and freezing grass-fed beef meatballs for the past week.  There would be some traditional items, like French Canadian Tourtiére, and some new dishes like fermented kohl rabi and ginger from the farmers’ market.  I had whittled my list down to making devilled eggs, polishing silverware, and cleaning the bathroom, in no particular order.

I watched the weather carefully and by Monday, it seemed like Northern New England had escaped the worst of the ice storm.  I fell asleep in the living room, looking at Mon Beau Sapin.  A light sleeper, the click of the power going out at twelve thirty a.m. woke me up.

I won’t belabor the next thirty-six hours.  For all my talk about being prepared for the Apocalypse, I was not prepared for losing electricity.  I was like the teenager who didn’t get a pony for her birthday.  I was inconsolable inside.

It was even difficult to enjoy the beautiful flowers Reggie sent me. 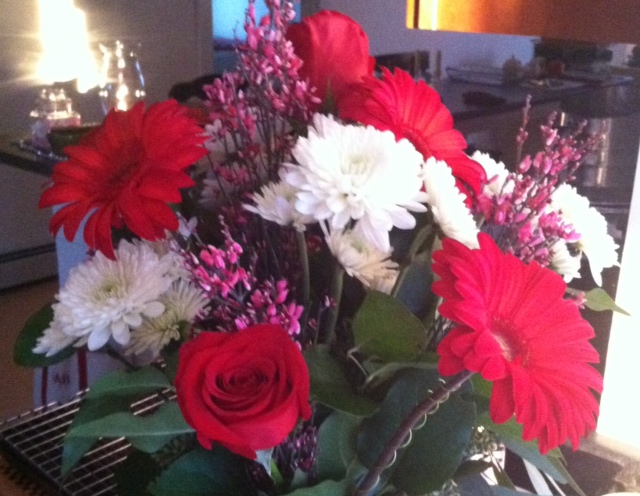 I don’t have any answers, edicts, or advice today.  In the big scheme of things, it was a minor inconvenience and I have a tendency to think “If only this had happened, or that had happened, everything would have been better.”

This will conclude blog posts about ice, Christmas fantasies, and birthday ponies.  I am sending out two special thank you’s today.  One to my good friend and next-door neighbor who tried to console me and the other to my mother, St. Helen of Immaculata, who can now add “stepping up and out of her comfort zone to rescue Christmas” to the list of her accomplishments.

This entry was posted in Friday Pillow Talk and tagged Christmas 2013, Ice Storm 2013, There is no app for that. Bookmark the permalink.

1 Response to A Christmas Fantasia