When Seagulls Recline at Table

As much as I try to remember all the details of my job at the wedding boutique, there are days when searches through my papers and my memory come up short and empty.  Sometimes it seems like it didn’t really happen.  Maybe I had never worked at a broken down old riksha of a bridal boutique.  Maybe The White Sarcophagus, like Maggie Sottero, never existed at all.

We carried the Maggie Sottero line of wedding dresses at The White Sarcophagus.  “With design studios in Sydney, Australia and Salt Lake City, Utah,” this particular line was our most popular.  Many “Maggies” had a lace up back, something I’d never seen before.  This contributed to the line’s popularity, plus the dresses were moderately priced.  No, they weren’t the cheapest dresses we carried, but they weren’t the most expensive, either.  Because the Sottero line was so popular, imitations and designer knock-offs multiplied like an unhinged virus.  Brides were encouraged to buy Maggie Sottero dresses only from authorized locations and The White Sarcophagus, fortunately, was a dealer of such distinction.

Accept no substitutes, lest there be “dissatisfaction, disappointment and regret.”

One additional inoculation against (gasp!) walking down the aisle in a fake Maggie Sottero dress was the “Certificate of Authenticity” the bride received when she bought her dress.

As an authorized Sottero salon, over sixty percent of our inventory consisted of “Maggie” samples.  Even these came with a blank certificate in the event a bride insisted on buying the floor model in a Veruca Salt-like rage, wanting a Maggie Sottero dress NOW!  Who was I to halt such immature impulse, especially when it meant a cool chunk of cash in the coffers at the end of the day?  Scattered around the mess of papers in the back room were spare certificates, some of them used as scrap paper for telephone messages and complex mathematical calculations.  One of them met the keys of my old electric typewriter. 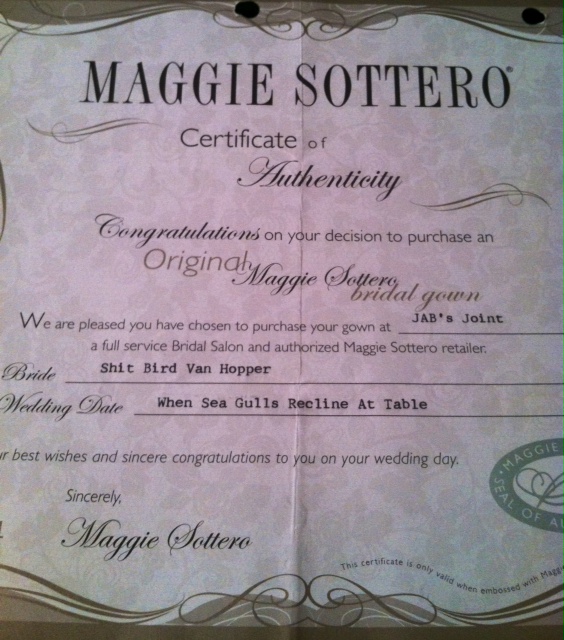 Who was Maggie Sottero?  Did she exist?  Or was she a name dreamed up by a focus team in a marketing meeting?  The dresses are still wildly popular and “reality” Tee Vee character Desiree Hartsock, a bridal stylist herself, is teaming up with the company to design a one of a kind dress for her upcoming “wedding.”

This wedding business is surely a “riddle wrapped in a mystery inside an enigma,” n’est-ce pas?

I had forgotten about Maggie Sottero until a few months ago when Samantha Van Hopper sent me a package of old letters I wrote to her in those long ago days at the bridal boutique.  Read along with me from February 24, 2005 and see for yourself how things were going at one of Maggie Sottero’s authorized locations.

“…regarding the White Sarcophagus…what is happening is I am doing too much.  The two owners have neglected the business for a long time.  They used to enjoy it, I guess, and spent much time there, but in the last year it has slid down the tubes.  They try to shake it up every once in a while, but it’s always too little, too late.  They’ll run a promotion and then they won’t follow through.  Running a business is a full-time job, whether you’re the owner or not.  I have come in and tried to organize things and they seem to appreciate it.  But I think it’s too much.  It was only supposed to be part-time.”

“Most recently, both owners went on vacation with a few days’ notice and left me in charge.  They didn’t run payroll, so neither Veronica nor I had been paid.  I suppose I could have written checks for it as I’ve done for the COD deliveries, but this didn’t seem correct.  I had to cancel my coiffure appointment because there was no one to open the store.  I’ve been spending a lot of time at this and even spending my own money for things like stamps, paper, and cleaning products.”

“When they got back from vacation, they started talking about selling the business.  From the papers I’ve seen on the desk, it looks like they want $130,000 for it.  I don’t know what this amount of money would include.  A bunch of inventory?  It seems like a lot of money and lately all the dresses look soiled and ratty to me in spite of my efforts to keep things looking good.  I just wouldn’t want to put my condo up as collateral for a bunch of old dresses.”

“The White Sarcophagus is starting to bring me down.”

Soon after writing this letter, Veronica gave her notice and I was all alone to complete the Maggie Sottero certificates of authenticity.

3 Responses to When Seagulls Recline at Table