Back in the 1970’s, we were all intrigued by the television show, The Six Million Dollar Man.  Having the technology, a fictional governmental agency rebuilt astronaut Steve Austin with bionic body parts because…they could.  Austin could run faster than a car and he could lift boulders.  His eyesight was better than an infrared rifle scope.  All his superhuman activities were televised in slow motion with accompanying “boing boing boing” techno sounds.

It ran for 5 Tee Vee seasons.

My father, Herman, is not an astronaut, but he is a pretty healthy guy.  He eats right, takes vitamins, and exercises.  He’s never gone to a health club or a gym, but he does have an old school, Charles Atlas-style chin-up bar in the basement he will occasionally hang from.  He has a few free-weights, too.  Mostly, though, he’s developed good upper-body strength from his retirement career of cutting wood with Uncle Bob.  They hoist big and heavy Stihl chainsaws around and cut down trees.

Given his general good health, I was surprised when he started limping on his left side about two years ago.  He was very stoic about it; claimed he had a pulled muscle or he had overdone it the day before.  We teased him, said he was “henkin’” like O’Pa.

But he wasn’t as active as I had remembered him to be for such a healthy guy.  I’d stop by the house and he’d be sitting in his lawn chair instead of doing things.  He didn’t want to take walks with Helen and he hardly went out to The Farm anymore.  Even Uncle Bob started saying things like “I haven’t seen your father all week.”

The limping didn’t improve and his nurse, Helen, eventually took him to see a doctor.  The diagnosis: “bone on bone osteoarthritis of his left hip.”

Dr. Michael Regan, an orthopaedic surgeon at Central Maine Medical Center, explained the diagnosis to Herman and Helen and outlined the solution.  Dr. Regan had the technology and he could rebuild Herman’s hip.

Herman’s old hip would have to go!

Not one to rush into anything, Herman seriously considered the matter.  Maybe he over thought it a little.  Should he have a second opinion?  Dr. Regan wasn’t at all insulted; he assured Herman that the diagnosis would be the same: bone on bone osteoarthritis.

“When the pain gets bad enough, I’ll be here,” he said.

Each time I would see my father, I would remind him that there was no magic cream that would improve and grow the cartilage in his hip socket.  He remained skeptical.  He’s stubborn, remember?

I outlined how good it would be if he got a new hip.  He could go to The Farm and cut wood again, mow the lawn without pain, and resume his rigorous shoveling schedule.  I still needed chainsaw lessons.

I pointed out the Androscoggin River trail, visible from my backyard, and explained how enjoyable and easy walking it would be with a new hip.

Worry and anxiety being my natural state, I was one mess of nerves on Monday morning when the nurse wheeled my father off to surgery.  I tried to be mature and composed; I tried to be “stoic” like my father.  After a Christmas-eve like eternity, the phone in the waiting room rang; it was Dr. Regan.  Herman was safely out of surgery!

Herman has been a model patient.  He’s doing great with his physical therapy and not complaining about anything.  He’s going to be discharged today and I’m sure he won’t miss the view from his room. 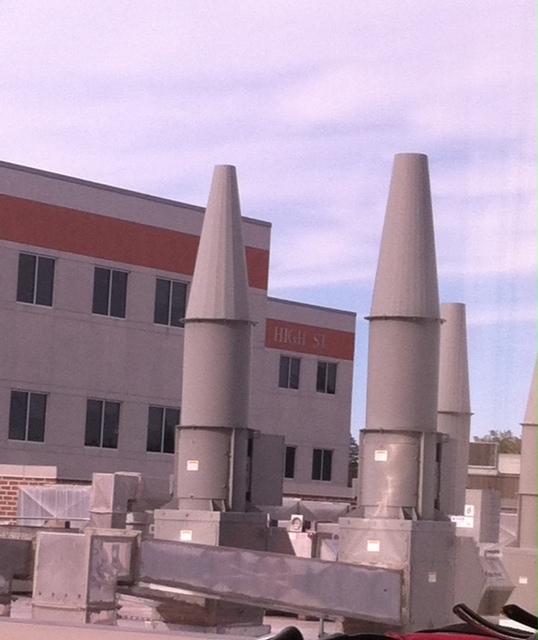 His recovery will continue and he’ll have to follow some hip precautions.  He won’t be cleared to run his chainsaw for a while, either, but I have a good feeling that by the time the first snow flies, he’ll be clearing the driveway of flakes faster than bionic Steve Austin.