Pass Me a Chocolate, Quick!

On Monday, September 22, 2014, President Barack Obama authorized an airstrike against Sunni militants in Syria.  The New York Times reported the United States and her allies were “unleashing a torrent of cruise missiles and precision-guided bombs.”  Included in this glittering disco ball of firepower and noise were “American fighter jets and armed Predator and Reaper drones, flying alongside warplanes from several Arab allies…”

The next day, Tuesday, September 23, 2014, the President and his entourage loaded up Air Force One and headed to New York City. Poor David Patrick Columbia dared not venture out of his Manhattan neighborhood because of all the traffic congestion created by the President’s visit to the United Nations Climate Summit.  There were also many thousands of protesters in the city, including my nephew.

The Baumer rode to the protest in a not-so-glamorous Megabus.

The President spoke eloquently, using big words and small, to explain how “nobody gets a pass” when it comes to combating climate change.

Meanwhile, back here in Moxie Town, I’d been feeling guilty about driving all the way to New Hampshire last Saturday to clean out and close my post office box in Rye Beach.  Does the President feel similarly guilty when he steps onto a jet or helicopter, considering the immense and exponential environmental weight of jet fuel versus, say, Jeep sneakers on pavement?

Adding to my green guilt, I wondered how I had gotten onto so many political mailing lists, as my post office box was jammed, jammed, jammed with flyers of all stripes.  I sorted through the billets.  I had questions.

“Don’t they know I don’t live in New Hampshire anymore?” 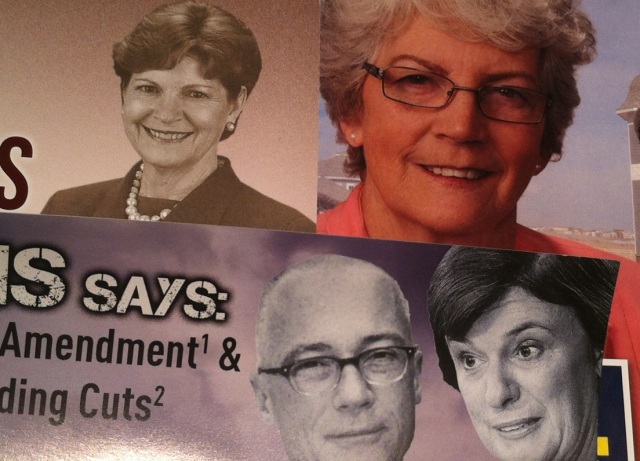 To top off all these intellectual insults, I had not only one but two AARP membership applications.  For only $16 per year, I was eligible to receive many special gifts, including a FREE TRAVEL BAG!  Made of the finest imported petro-vinyl, this bag would enhance my membership in the prestigious organization and “make the most of life over 50.”

I overreacted.  I cut up the letter and my membership card and stuffed it into the return envelope, scribbling a few comments on the back.

Then I flipped it over.

Can you believe AARP doesn’t even send prospective members a postage paid envelope, the cheap BLEEPs?

Deciding the story would make a better blog post, I tossed the envelope into my dump pile.

As penance for my environmental excesses of the weekend, I walked everywhere I had to go on Tuesday.  A Prius zipped by me on my way to my parents’ house and I shouted after it “I’m greener than you!  Nobody gets a pass!”

On Wednesday, I paused briefly, wishing a silent birthday greeting to F. Scott Fitzgerald.  Old F. Scott didn’t even live long enough to get his FREE TRAVEL BAG, leaving the world before his glorious gin-fueled youth faded completely.  He was only 44.

Mulling all these things over on Thursday night, I was SHOCKED to read the Staten Island Zoo’s groundhog, Charlotte, died one week after squirming out of New York City Mayor Bill de Blasio’s arms on February 2, 2014.  Given my own rumbles with rodents, I read the story intently.  What baloney!  First, no groundhog dies by tumbling five feet.  Even if the animal fell directly on its head, it wouldn’t die.  And I can tell you that with certainty because the day I tackled the critter in my garden, it took more than one brick to bring the animal down even though I hit my target with the precision of a Tomahawk missile.  After all, I was a Mountain Valley Conference shot-put runner-up in high school and my aim is very good.  Yet…it took more than one brick.

Why Staten Island Charlotte’s death seven months ago is news today is the story I’m interested in.  And yet…it’s just another digital keystroke on the big Etch-a-Sketch of information.  Shake it up and it’s gone!

It’s been one of those weeks.  As I raise my world-weary head from the pillow this morning, I just want to shout out “pass me a chocolate, quick.”

4 Responses to Pass Me a Chocolate, Quick!