A few nights ago, I finally unwrapped the gift my friends Mary and Dave brought to my house on Thanksgiving.  I hated to unwrap it; the slim box wrapped in orange paper with a yellow and orange polka dot ribbon blended into my living room decorating scheme perfectly.  It looked elegant on the coffee table or on the credenza.  But damn it, I wanted to know what kind of chocolates were in the box.

It turned out to be a box of Russell Stover’s “All Dark” chocolates and the first thing that came to mind as I lifted the lid were the lines from Forrest Gump.  “Life is like a box of chocolates.  You never know what you’re going to get.”

Sitting in my dim living room, illuminated only by the red Christmas lights in the windows, I could not see the lid diagram outlining the box’s contents.  But I knew exactly what I was going to get because memory told me that the oval-shaped Russell Stover chocolates are always butter cream.

It was a raspberry cream and it tasted as good as it might have tasted one Christmas at an apartment on the corner of Pierce and Pine Streets in Lewiston back in the early 1970’s.  That’s the first clear memory I have of my Aunt Dot, who lived there with my French Canadian grandmother, or “Mémère.”  At Christmas, Aunt Dot always bought a few boxes of Russell Stover chocolates and they would come out of the cupboard when we visited the apartment.

The rest of the year, though, she kept a tin of the hard candy “Satins and Chips” in the living room.  Not only did those sparkly-beautiful candy tins hold a mysterious assortment of confections, they were practical too.  Aunt Dot, a heavy smoker who worried about fire, emptied her ashtray remains into an old emptied tin at the end of the day, securing the lid and securing the building from the dangers of a stray smoldering ember.

Over the course of time and other family deaths, I inherited a box of Aunt Dot’s photographs.  No one could eat a forkful of Easter ham or a bite of Christmas finger roll until Aunt Dot had snapped a picture of it for posterity.  Then there would be the “group photos” of everyone attending these family gatherings.  Many of the photos were familiar to me because Aunt Dot always had two or three copies made and gave one to my mother.

Here’s a picture of Aunt Dot picking up some prints in her travels about town.

Aside from trips to different parts of America and Canada, she lived, worked, and worshiped in Lewiston, Maine her entire life.

I’ve written a lot about my Uncle Bob here on this blog and very little about my Aunt Dot.  Uncle Bob stories are summer stories; this time of year, I think of my Aunt Dot.  When I look through the old, old pictures of this dark-haired beauty, it’s like I’m looking at a different person than the one who remembered my birthdays, First Communion, and Confirmation with a card and a cash gift.  Who was this vivacious lady in the yellowed newspaper clipping titled “Au Bal De St. Doms?” Or at a Polynesian restaurant in New York City?  Or at Blinstrub’s Village in South Boston? 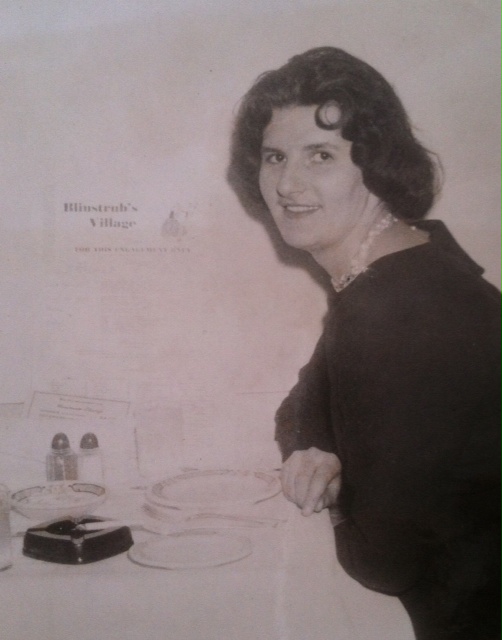 Here in this old box of photos, still smelling faintly like one of Aunt Dot’s Winston ciggies, there’s a story.

This entry was posted in Friday Pillow Talk and tagged Aunt Dot, Blinstrub's Village, Dorothy J. Belaire, Every life has a story, Russell Stover, Satins and Chips. Bookmark the permalink.

5 Responses to Satins and Chips