I started today’s post during the Super Bowl commercials, watching them at my parents’ house.  We’d just had our annual Super Bowl pizza, half pepperoni and half ham.  When you’ve lived as long as I have without a Tee Vee, the commercials are surreal and even other-worldly.  Not a heavenly kind of other-worldliness, either.  More like “is this the Apocalypse?”  But my rants about 30 and 60 second marketing messages masquerading as entertainment aren’t why most people visit my blog.

Saturday was the first day I felt “well.”  Thank you to everyone who sent me “get well” wishes and health suggestions here on the blog or privately.  It feels very good to be better, although I think I lost two weeks of my private life.  I used the energy I had each day to shuffle up to my office and do my pay job.  Happily, Monsieur DeeHan found someone to plow my driveway during Monday’s blizzard and I was able to shovel the foot of snow we got on Friday.  The “Maine Work Out.”

On Sunday morning, I snowshoed around the back yard and sunk into the snow about a foot before reaching “equilibrium.”  It’s just a good old-fashioned winter; another foot of snow is predicted for later today.

While I was sick a famous blogger decided to stop blogging.  One of the things he said in his farewell to his readers was “I am saturated in digital life and I want to return to the actual world again.”  This struck a chord with me and I started thinking about the amount of time I spend in the digital world.  Reading e-mails, scanning Twitter, and reading blogs.  It’s time-consuming.  It’s tiring.  Sometimes, it’s disquieting because I’m reading about controversies that I can’t fix.  I want to be informed, I want to share information.  But mostly, I want to live a real life and encourage others to do the same.  Sometimes, staring at a screen makes my eyes, mind, and heart hurt. 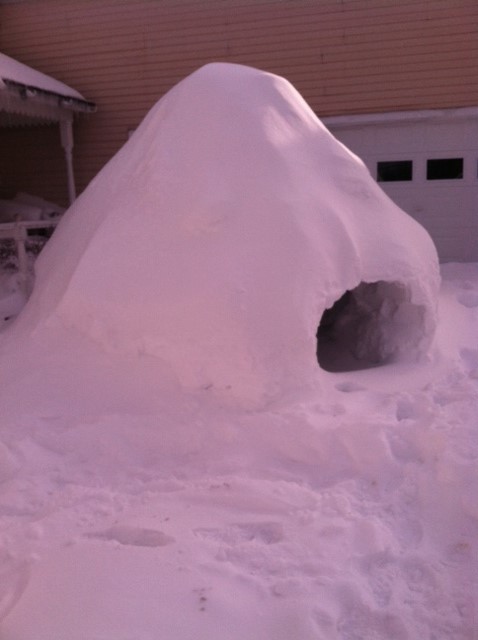 I noticed not one but two snow forts in town this week.  Saturday, I crawled into the one in the picture and took a look around.  Not too shabby.  The real world is like that sometimes.  I’m glad there are still a few children around who know how to dig in and enjoy the snow.

I’ve got a new old secret weapon for today’s snow which hasn’t yet begun to fall. 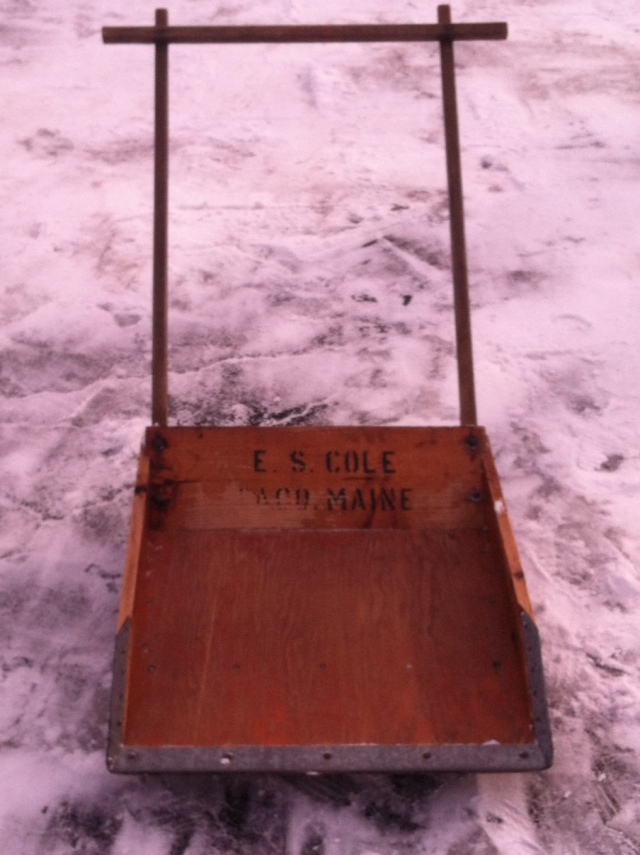 Before there were Super Bowl commercials, half-time shows, and reality television, there were reclusive socialites living with cats in dilapidated East Hampton estates.  The “real world” is sometimes stranger than anything on Tee Vee.  If you’re in this part of Maine this week, it’s possible to see the talented Monmouth Community Players present the lives of Big Edie and Little Edie Beale in song.  If you’re not familiar with Mrs. Onassis’s relatives, you can read about them here.  And then go to the historic theatre at Cumston Hall in Monmouth.  It’s a full package of songs, sadness, and strangely sympathetic characters.

It’s a Monday in Maine.  Lots of life to live today.  Now go put down your device and live it.

This entry was posted in Back to School and tagged Grey Gardens, Monmouth Community Players, real life, Super Bowl Sunday. Bookmark the permalink.