Monday again? Sometimes things just aren’t what they seem.  It looks like a mere dusting on my driveway; why did the sand truck just go by my house?

Last week was such a “vigorous” week; I shoveled my driveway four times.  I snowshoed every day.  Somewhere between scooping up, stomping on, and pushing snow, I discovered a teeny tiny discolored spot on my bedroom ceiling.

I’ve watched my neighbor Breezy rake his roof each and every time he shovels, but I haven’t been so diligent myself.  Roof raking is not as easy as it looks and sometimes after pushing 50 or so scoops of snow up and over the banking, I shrug my shoulders and say “eh.”

I won’t do that again.

After I discovered the teeny tiny discolored spot, damp to the touch, I sent an alarmed text with pictures to Mr. DeeHan.  He was fighting a cold.  It wasn’t his week.  But like the bon homme he is, he texted marching orders.  Go to the hardware store and buy a hundred pounds of ice melting pellets.  He’d be here with a ladder within the hour.  Maybe it wasn’t what it seemed.

I won’t go into laborious and painstaking detail except to say sometimes a smooth white blanket of snow is more than a pretty picture.  Things aren’t always what they seem; the ice dam was melting within an hour and Mr. DeeHan left the ladder up against the roof for regular inspections.

It snowed again Saturday night and I got my shoveling done early on Sunday morning.  Even though I had been out and about a few times during the week, all the snow and the dull routine of moving it left me feeling trapped in my own winter wonderland.  I texted Mr. DeeHan, suggesting a run to Lucy & Edna’s in Pownal.  The weekly French music program was on when he got here and he listened for a minute then asked what the singer was saying.  It was a French language version of Simon & Garfunkel’s The 59th Street Bridge Song (Feeling Groovy).  Except in French, there is no word for “groovy” and the Franco refrain was “Vive la vie que c’est bon la vie.”

I hadn’t listened carefully and the singing was pretty fast and I told Mr. DeeHan I didn’t know what they were saying.

He laughed and we headed out in the Jeep.  Sprung from my own surroundings, I was impressed by the beauty of the snow on the trees.  Someone else’s snow was lovely.  I suggested this to Mr. DeeHan but he declined the bait.

“You’re not going to get me to say the snow is beautiful.”

Edna & Lucy’s did not disappoint with fresh donuts and grilled egg & sausage on rosemary focaccia.  There was some sun and it wasn’t yet crowded in the restaurant. 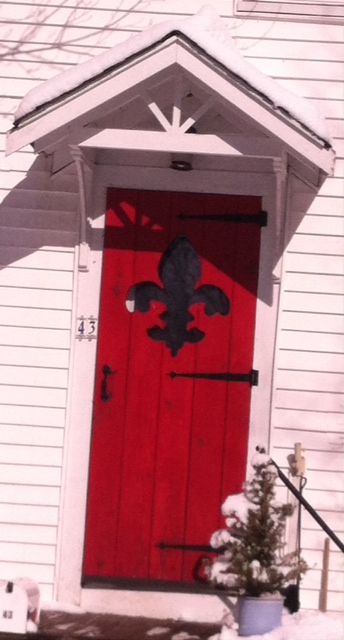 We were living the good life…feeling larry.