We’ve had fun making cakes here on the blog these last few months.  There was a maple cake, a lemon cake, a banana cake, and a spice cake.  Last week’s cake was a tribute to new blogger and twitterati, Benjamin Shalom Bernanke, The Economy Cake.

There’s still a piece of it in the refrigerator.  The low profile, likely from quantitative easing, was lifted by some cream cheese frosting.  But feeling a certain cake-full corpulence in my step lately, I decided to knock it off this week.

Last weekend, when Handy and I were driving around looking at standing seam metal roofs, we ended up at a certain intersection in the middle of somewhere.  Would we go left or right?  I said “let’s go right and see where this road goes.”

We were just driving around and I was enjoying the nothingness of it.  I felt guilty, though.  Green guilt, from wasting gas, and then some “I should be doing something productive” guilt.  I asked Handy if he thought it was unusual that I was happy being chauffeured around the countryside.  He said “You’re cooped up in your house all week long.”

Cooped up?  It’s not true that I’m in my house all week long.  I walk to the post office every day, I walk after work.  I stomp around the yard, trimming bushes.  Why, yesterday, I could have shoveled if I’d wanted to.  I drive places, too, like to Lewiston and Brunswick.  And Brunswick and Lewiston.

Maybe Handy was right.  I had been cooped up all winter.  The timing of his absolution was perfect, too, since a local media outlet asked me if I wanted to do some blogging for them, just once a week.  It might be the perfect place to revive my “Lady Alone Traveler” shtick.  And my drapery fabric was in at the Exeter Handkerchief Factory; they stay open late on Thursday nights.  Why not jump on the Downeaster and see if I still had it in me?

Exeter, New Hampshire is a lovely town, even on a snowy, misty day.  The fabric store is right next to the train station, so I settled up my fabric account and promised to return before closing time to pick up the goods.  Then, I took a walk to the center of town, past familiar houses and buildings.  Look at that old oak tree.

Apparently, the Exeter Historical Society’s building was not built with Carnegie cash.  It fooled me.  I’ll have to go back some day and investigate. 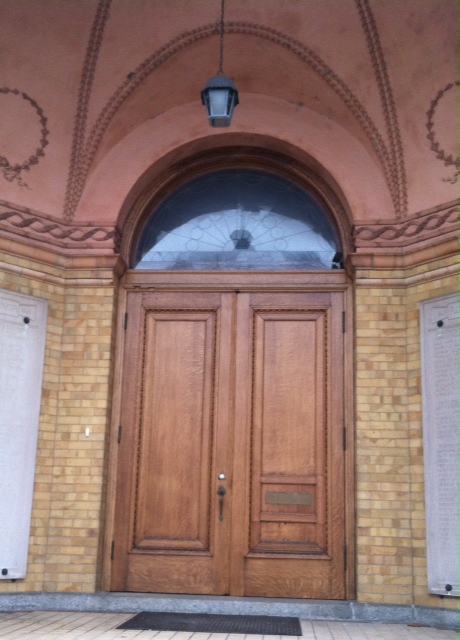 Exeter has sturdy sidewalks, restaurants, an independent book store, churches, and lots of history, for a start.  If I lived in Exeter, I’d write a walking guide of the town.  Maybe I’d be the official spokeswoman for the general excellence of walking about Exeter.  Sort of like those Freeport flag ladies, except without a big painted conversion van.

Exeter is a walker’s destination.

Alas, I do not live in Exeter.  I’ve rolled the dice and I’m back in Lisbon Falls.  One thing I’m sure of, though…there is beauty everywhere and The Lady Alone Traveler will find it.

This entry was posted in Friday Pillow Talk and tagged Exeter, Exeter Handkerchief Factory, The Downeaster, The Lady Alone Traveler. Bookmark the permalink.