Is there any topic not covered by Wikipedia?  Even a “Sunday Drive” is defined; according to this source, I now know Henry Ford was an early advocate of leisurely motoring because it led to the sale of automobiles.

After a busy Saturday of tree pruning, raking, and other spring home maintenance activities that vaguely resemble yoga, Handy offered to take me on a Sunday drive.  By definition, a Sunday drive has no destination, but some place a little beyond Bath seemed fine.  It’s early enough in the “Vacationland” season that impromptu trips to tourist destinations are still possible.  The roads were a little busier than normal, but no signs of serious tourists yet.

Not a single recreational vehicle passed us by, either.

Handy has a friend who lives somewhere down the road to Reid State Park.  Along the winding dirt road to the main house, we passed the Spartan. 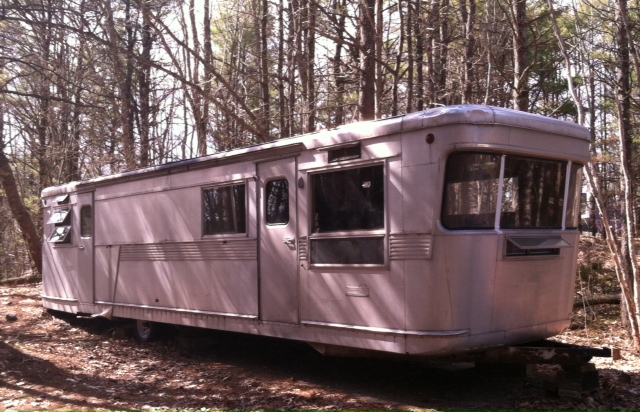 After World War II, the Spartan Aircraft Company transformed its airplane production into the lavish trailer camper business.  The company, based on Tulsa, Oklahoma, produced a line that was far from “Spartan.”  Some of the earliest trailers were about half the price of a new home, making them a luxury item.  As the post-war prosperity continued, the company produced such now collectible campers as the “Manor,” the “Royal Manor,” and the “Spartanette.”

One of the early Spartan ads reads “you may not find a home in every place you roam, but when you own a Spartan, you always have a home.”

What is it about the dulled aluminum trailer, a Spartan “Royal Manor” that calls out to the nomad in all of us before we’re brought back to our senses?  I guess it’s the spirit of renovation, maybe a latent fix-it gene, or the desire to see some cute curtains in the windows of that Spartan that got me researching the vintage travel trailer craze.  It was all fun and games until I started reading about “understanding the RV’s water system.”  Black water, grey water, potable water, pumping stations…one video suggested that RV plumbing problems could be one of priciest problems an owner will encounter.  It could turn “happy motoring” into an expensive nightmare.

When it comes to buying and restoring a vintage mobile home, I’m with this writer who was at one time trying to sell a 1951 Spartan trailer:

“Have you ever dreamed of hitting the open road, dragging all your crap behind you?  Me either.”