It’s December 21 and there are four cards to write, three writing assignments to finish, two batches of ginger snaps to whip up and one meat pie to bake.  A friend I ran into at the Franco Center on Saturday night said it best.

“We are in full screech mode now.”

The event at the Franco Center was a holiday-themed musical performance and the hall was glittering with lights, voices, and a downright hep combo of musicians.  The picture I snapped during the show is a poor representation of the magical evening, but I loved the star. 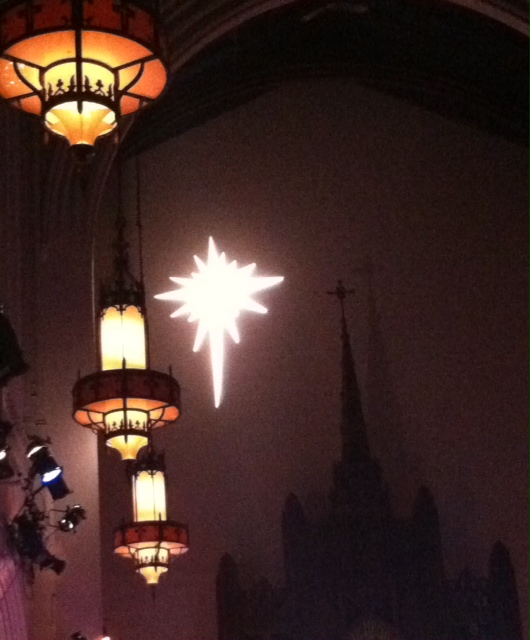 One of my neighbors was in the show and although I knew she taught music and drama in a local school, I confess I did not know she had such a sweet and melodic voice.  It was a beautiful evening in every way; I wish you could have been there.

Saturday night was “peak Christmas” for parties, performances, and events on the social swirl calendar.  On the national news stage, there was a presidential debate.  The complete ratings for the spectacle will be released today, according to an article by Brian Stelter for CNN Money.  He said the Saturday time slot might have been designed to “repel” viewers.

Personally, I’d prefer to think most engaged and gregarious citizens of this great nation were on a holiday news fast, suggested by my brother on his blog Friday.  I jumped on the “news fast” bandwagon on Saturday and although the criteria for my own program are still developing, I have eliminated all radio news broadcasts for the duration of the Christmas week.  Handy and I agreed on a notification system of texts, drive-bys, and flashes of light in the event The Apocalypse arrives during my fast.  In the very worst case scenario, I can see the street light right next to Handy Land if I stand up and look due east in my upstairs office window.  Unless the house is shaken to its foundation, the system should work out well.

As of blog publication time, it’s “all clear” at Handy Land.

This year, my family will celebrate together on Christmas Eve “over the river and through the woods” at my brother’s home.  He and his wife, Miss Mary, put on a great shin dig and if we’re lucky, Uncle Bob will meander his way over to join us.  I’m putting the final touches on a scheme for “Baumer Bingo” using a bingo cage Handy found in his travels.  I’m hoping my brother is on board with the game of chance.  I’ll bring all the game parts and the prizes and he’ll just need to supply some appropriate music.

Der Bingle would be nice.

If I recall correctly, we used to play a bit of Bingo during our childhood Christmas celebrations.  That would be after we’d ask Aunt Dot if she’d play a game of “52 Pick Up” with us.

Who knows, maybe it will be the start of a new movement, something like “be the bingo you want to see in the world.”

This entry was posted in Weather and Seasons and tagged Christmas 2015, Jim Baumer, The Dolard and Priscilla Gendron Franco American Heritage Center. Bookmark the permalink.