They’re tearing down the last major structure of the old Worumbo Mill.  I knew this day would come and even though I tried to mentally prepare myself, I am experiencing the same sadness I felt when they tore down the old U.S. Gypsum plant just down the river from the Worumbo.  The difference between the two events is I live here now and I watch it happening day after day.  Even if I don’t go downtown, from my office window I hear the grinding, hammering noises produced by the one lone bulldozer knocking the building down.  The current building’s owner must have selected the lowest priced demolition service to bring down their depreciating asset.

Steve Yenco, a local resident, has a drone called “Moxie” and he’s been posting pictures of the demolition on Facebook.  Steve has an appreciation of history and a sense of the traces it leaves.  That’s probably why he started taking pictures, but I could be wrong.

Last Saturday, while in Hallowell for a garden tour, I headed down the Old Winthrop Road.  A cluster of dilapidated buildings caught my eye and triggered a memory.  I turned around in a driveway and headed back to the road between the buildings.

It was the former Maine Industrial School for Girls.  The buildings have a history; you can begin to cobble it together by starting with this Wikipedia page.  “Reform schools” began as “training schools” for troubled young women.  As I researched the internet, looking for forensic information I could provide to my readers, I found a book by Barbara M. Brenzel titled Daughters of the State:  A Social Portrait of the First Reform School for Girls in North America, 1856 – 1905.

The title chilled me.  My parents instilled the fear of incarceration at an early age.  I vaguely remember my father suggesting wayward behaviors might land me…in Hallowell!  That was all it took! 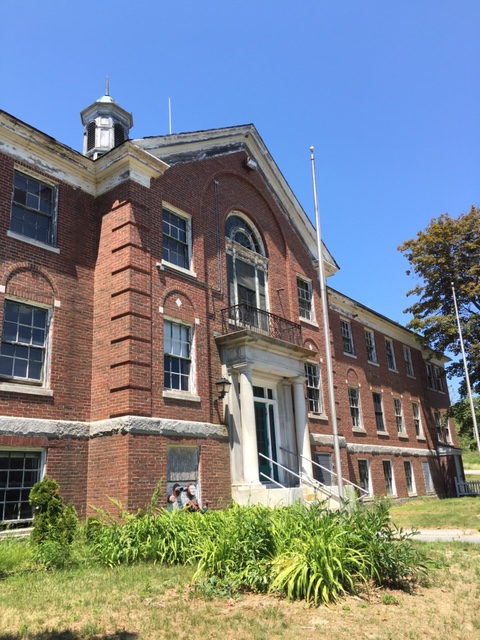 Just thinking about being a “daughter of the state” scared me and I sat up a little straighter in my chair at the Marion T. Morse school, let me tell you.  Freedom of movement was and is important to me.  I was Herman Baumer’s daughter, not Richard Nixon’s.

Seeing these old buildings reminded me of this and it also reminded me of how difficult it is to cobble together the facts of history.  Pictures and places leave traces, but there’s more to it than that.  There were people involved.  Did anyone record the things they said?  What did they eat?  What did they wear?  Did they leave any diaries?  Are there any former residents still living?

Fortunately, for now, our little town has a historical society with a vast assortment of information about the Worumbo Mill and its history.  It’s not so far away in the rear view mirror, but the destruction of the building will add a little distance and for some, the big gaping hole by the river that will replace “that old eyesore” won’t mean anything.  Some people in town, from what I read on Facebook, think someone is going to build a luxury hotel or a casino there, not realizing the property isn’t a “daughter of the state.”  It’s still a depreciating asset on a spreadsheet somewhere.  Until it isn’t.

History leaves traces.  They’re not always as easy to find as swiping your Tic Tac phone and sadly, you might have to leave your couch to locate them.  I can’t promise that it will be as exciting as Candy Crush Saga but it just might keep you from becoming a zombie or worse, Richard Nixon’s son or daughter.

1 Response to Not Richard Nixon’s Daughter