This spring, I planted a package of Cosmos flower seeds in a small garden bed adjacent to the back steps.  This spot is also home to a Stella de Oro daylily and a late-blooming hibiscus.  Last summer’s Grandpa Ott morning glories showed up again this year too.  It’s a busy spot.

I’d never planted Cosmos before and reading the packet reminded me I once had an album by the folk duo, Aztec Two-Step.  The 1972 vinyl long-play record, self-titled “Aztec Two-Step” featured popular songs like “Baking” and “The Persecution and Restoration of Dean Moriarty” as well as “Cosmos Lady.”

The latter song was not about flowers; I don’t know what it was about.  Even though I listened to it a hundred times, I never paid much attention to the words.  “You asked me if I fly, and I answered you with my eyes.  Astral projections, cosmos connection beyond the skies…cosmos lady.”

Clearly, this was not a song about flowers.  And “Baking” probably wasn’t about bread either.

There was a great deal of interest in the cosmos this past week as the United States witnessed a total solar eclipse on Monday, August 21.  The experience was brief here in Maine; I was at the dentist getting my teeth cleaned.  When I left the office, I did look at the sun for one second and could view the astral projection.  Interestingly, Monday was the day my first Cosmos flower bloomed.  Coincidence? 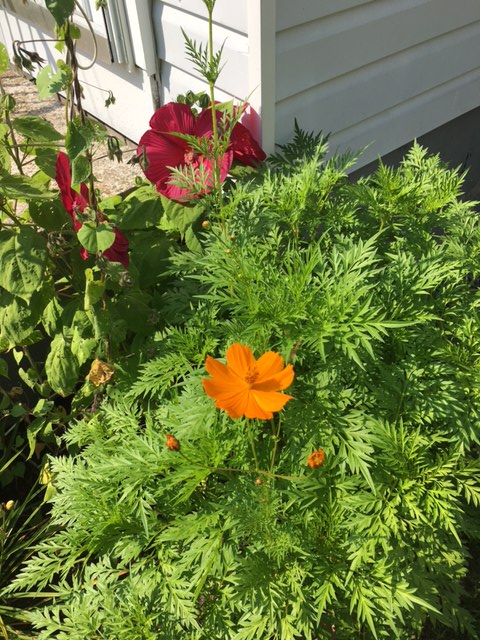 There’s a lot of green foliage with very few flowers.  It’s like an assortment of old folk songs; there must have been lots of green foliage behind those musical flowers, if you get my astral projection.

Speaking of spiritual catharsis, I’ve just begun researching the gentleman who built my house and many others in Lisbon.  His name was W.D. Blethen and he was born across the river, in Durham, in 1838.  He learned the building trade by working as a carpenter for a number of years, and then in 1891 bought a large pasture on the south side of the main road through town.  Many thought he was foolish to do so, but he turned the pasture into a suburban street and according to The Lisbon Enterprise Magazine (undated photocopy) it was a “fine little street located here with no less than seven snug dwelling houses and the eighth in the course of construction.”

In my research, I found Mr. Blethen listed in an 1899 “Spiritualists Directory” as a member of the “First Maine Spiritualists’ State Camp Meeting Association.”  This group sponsored an annual camp meeting at Buswell’s Grove in Etna.

Camp Etna reportedly began hosting spiritual retreats in 1876.  They incorporated in 1899.  In 1919, they changed their name to the Etna Spiritualist Association and continue under that appellation today.

Mr. Blethen was an enterprising builder and business man.  It’s early in the research and his association with Camp Etna, spiritualists, and the cosmos is unclear.  It will be interesting to learn more about him and other Lisbon builders as I prepare for a 2018 talk at the local historical society.  The talk will discuss the architecture, style, and provenance of the town’s residential dwellings.  The date is to be determined; please stay tuned.