I Could Have Mowed All Night

One day, I am going to read (or at least skim) every blog post I have published and categorize them with better themes.  On that day, I will likely discover that besides Moxie and Jeeps, mowing the lawn is a category I have written about twice or thrice every year.

Then there were posts about the variety of lawn mowers I’ve owned since I moved into this house over four years ago.  There was the self-propelled monster that tried to kill me and its replacement that only mildly discouraged me.  Then, in 2016, there was a $100 lawn tractor and a $20 Honda push mower, both found in yard sales and subject to occasional smoking and sputtering.  The lawn tractor was temporary and I’ve had no desire to replace it.  I liked the $20 Honda push mower.  But I knew its time was limited.

Mowing the lawn in August isn’t like mowing in May.  Depending on summer rainfall, an August lawn can either be dying out or growing with an annoying late season urgency.  This year’s lawn, growing with the aforementioned urgency due to recent rains, is a strange blend of electric greens with a few mushrooms thrown in.  Everyone in town seems to be behind on their mowing and there are fields springing up in residential neighborhoods because few can keep up with the green growth spurt.

I dragged out the Honda this week and prepared to get caught up.  I checked the oil and added some.  I pulled the starter and prepared for “away we go.”  A cloud of smoke came out of the muffler.  Not a small cloud, either.  It was practically Biblical, like the one God used to guide Moses in the exodus out of Egypt.  It was so heavy, my neighbor down the street came out to see what was going on.  He said maybe I had overfilled the oil and it was just burning off.  I moved myself, the mower, and the cloud into the back yard to minimize neighborly disruptions.

But the oil did not burn off.

Figuring I was well into the payoff from this $20 investment and taking a “go to hell” attitude, I went into the house for a respirator.  Damn it, I was going to finish the lawn and not asphyxiate myself.  Unfortunately, when I tried to start the mower again, it had seized up.  The Honda breathed its last.

As Charlie Brown would say…ARRRGGGHHHHH!!!!!

Four years in this house; four lawn mowing devices.  I texted my mother, she conferred with Herman and responded:

“I’ve spoken to Dad and Bob.  When Bob goes to McDonald’s, he will bring Dad’s lawn mower.”

Like clockwork the next morning, there were the Baumer boys, unloading a small “Yard Machine” push mower.  It’s cute and light as a feather, even lighter than the Honda.  And we know the Honda was an improvement on the self-propelled monster that tried to kill me in 2014.  Herman’s mower is so light, I was able to mow the pitch slope along the road without any assistive devices or clippers. 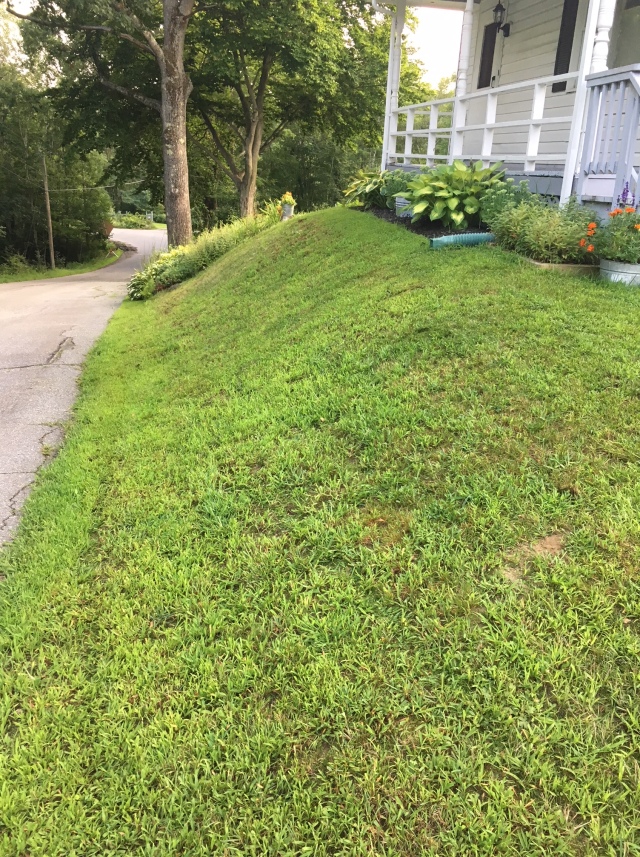 To use the popular expression: “Who knew?”

I’ll be on the hunt for a brand-spanking new lawn mower this weekend because I can’t borrow Herman’s forever.  Price is no object; you get what you pay for.  But one question I’ll be asking is “how much does it weigh?”

This entry was posted in Weather and Seasons and tagged Lawn mowers, mowing the lawn. Bookmark the permalink.
Loading Comments...