An Altercation on Pleasant Street

From this blog’s 2012 beginnings, I’ve used “Pleasant Street” as a metaphor for places of peace and serenity.  I wove this metaphor into my personal quest to move home and live life on my own terms in this small place.  It’s hard to believe I’ve now lived here in this town for more than five years.  Just the other day I found a copy of the lease I signed on August 17, 2013 when I moved into Rick and Gina Mason’s apartment on the Mason family compound.  It’s filed right next to a Blethen Street house document that begins “KNOW ALL MEN by these present,” and a deed to two acres of land in Topsham that I consider my piece of “The Farm.”  These are human accomplishments, the products of providence and hard work.

My personal quest has been difficult and as I’ve reflected on this chapter in my life, I’ve decided the past five years have sucked.  Whether it was the know-it-alls, the do-nothings, the wizened prevaricators, the convicted felons, the liars, the trolls, or the quislings who I allowed to interfere, God only knows.

This general discontent reached a crescendo on July 28, 2018.  The following morning, I sat in a small upholstered chair in my personal office, my Bible open on my lap.  Someone suggested I read five Psalms every day; I began there.  I found a small book by Dietrich Bonhoeffer about Psalms, The Prayer Book of the Bible.  This book appeared in 1940 and was the last of Bonhoeffer’s books published in his lifetime.  He died on April 9, 1945, considered a spy and traitor to the Third Reich.

Every morning since that day I’ve sat in my chair.  Every day.  My alarm goes off at 4:00 a.m. and I put on my robe and climb the stairs.  Bonhoeffer’s book includes a tiny chapter called, “The Blessing of Morning Prayer.”  The priest’s carefully chosen words are powerful and they resonated with me.

“The entire day receives order and discipline when it acquires unity.  This unity must be sought and found in morning prayer.  It is confirmed in work.  The morning prayer determines the day…The powers to work take hold, therefore, at the place where we have prayed to God.  He wants to give us today the power which we need for our work.” 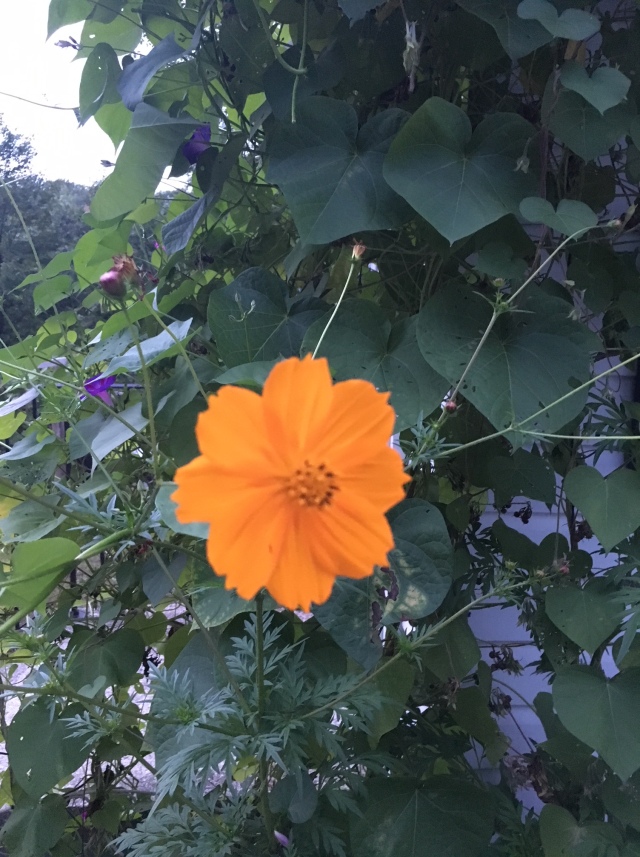 Bonhoeffer’s words, in the midst of sacred readings and meditation, sustained me these last two months.   Things are looking up.

Ironically, I had an unpleasant altercation Sunday morning on Pleasant Street.

As I have done for the last 15 or so years, I planted a row of sunflowers in Uncle Bob’s garden.  This year they were mammoth in every sense of the word.  But their giant seedy heads were drooping and it was time for them to go.  With an old four-tined digging fork, I loosened the roots.  I pulled them up and piled them near the road.  When I was halfway through, one of Uncle Bob’s cronies walked by on his way to nowhere.  I waved “hello” and kept digging.  Unfortunately, he stopped to address me.

“I know he’d never say anything, but Bob is not strong enough to dig up those sunflowers.”

Knowing many, many things about my uncle, including his medical and financial histories, I found it ludicrous that this gnome of a man should say such a thing about my beloved Bob.  My blood pressure quickly elevated.

“Do you see what I’m doing?” I asked the gnome, pointing to the uprooted sunflowers lined up like a cord of wood.

I did not know what this little man’s true intentions were in speaking these words.  I knew him to be a general know-it-all.  He was also a fortunate beneficiary of Uncle Bob’s kindness and generosity.  I looked at him and said “Why don’t you mind your own business.”

He sputtered gnome-like in a way only Gina Mason could appreciate were she still alive to receive my post-altercation string of texts.

Then I looked him square in the face and said “I have nothing more to say to you” and I stuck the four-tined digging fork once again into the earth.

He turned and walked on.

Twenty minutes later, there were four sunflowers left standing and Uncle Bob came around the corner with his work gloves on.  I gave him an abbreviated version of the altercation and said “you’d better not help me.  You’re too weak.”

He laughed and said something akin to “the gnome is crazy.  Everyone knows that.”

We finished pulling those sunflowers and I made sure Uncle Bob did not exert himself.  We loaded them into his truck and brought them to my house where they are now resting in peace in the gully-like area Uncle Bob once tumbled.

Bonhoeffer was right.  God gives us the power we need for our work.