When I was the co-chair of the Junior League of Boston’s 2006 Decorator Show House, I not only spent a lot of time at the Show House in Cambridge, but I spent a lot of time in meetings at the League’s Boston headquarters at 117 Newbury Street.  It’s a lovely old building; if you’ve ever been to the Kate Spade store on Newbury Street, you’ve been to it.  On the top floor is an old filing cabinet, filled with disintegrating paper folders full of Show House history.  I still dream of writing a book about the Junior League of Boston’s rich show house tradition.  When I write my memoirs, there will be a chapter called “How a Decorator Show House Saved Me from Being a Lonely Divorcee.”

Thursday was a good night to start my research, so I headed to the University of New Hampshire’s Dimond Library. 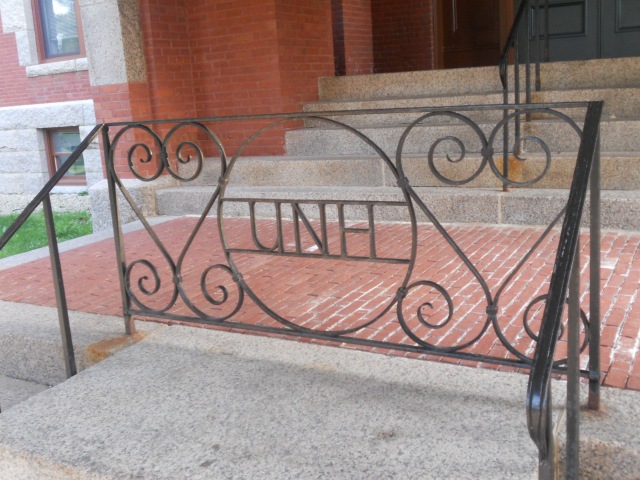 I love the summer silence of a college campus.  It’s easy to slow down and imagine it’s a different time and place.  Two ladies in smart summer dresses walked by; they would have looked oddly out-of-place had school been in session.  Were they a mirage?

Whooshing through the big library doors, I was easily and happily distracted.  If you like books, a university library is a big buffet.  Even though I didn’t study enough when I was in college and I deeply regret taking all of the Fogler Library’s beautiful silence for granted when I was there, I did spend a lot of time in the stacks.  I would pick a random topic, pull 7 or 8 books, and then sit and shuffle through them.  Papers didn’t get written that way, but it was interesting.  I still do this when I go to the Dimond Library and fortunately, there is only this blog waiting for me.

There weren’t any books about decorator show houses per se, but I ended up with two books remotely related to “homes” and “decoration.”  One scholarly volume was “The Invention of Comfort:  Sensibilities & Design in Early Modern Britain & Early America” by John E. Crowley.  The other was a humorous distraction called “A Skeptic’s Guide to Writers’ Houses” by Anne Trubek.

I pulled and then rejected the following books:

Add to these books my own personal collection of carefully annotated Junior League of Boston Show House magazines and I think I have everything I need to write a fascinating insider’s guide to decorator show houses.

Now, just where am I going to find the time?

As a reminder, the York Historical Society’s 23rd Annual Show House opened on July 14.  I’ll be visiting next week and writing about it on Friday, July 27, 2012.

1 Response to Talk of The Toile – Show House Books