When she was in her 70’s, my father’s mother, my Nana, had a heart attack.  After this happened, it became harder for her to climb stairs and do housework.  Most of the grandchildren took turns “helping Nana” with various chores around the house and since it’s always more fun to clean someone else’s house, I put my best effort into it.  Easy enough; all I had to do was dust and dry mop Uncle Bob’s bedroom.  I can still see the mid-morning sun coming in through the window and shining on this old picture on the bureau. 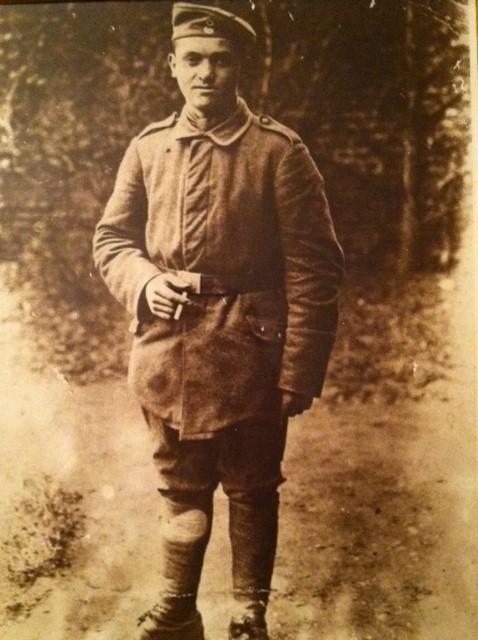 Because I was young and I didn’t understand time and history, it wasn’t until I was older that I realized that this soldier was my grandfather, Michael Leo Baumer.  He was born on February 11, 1899; 114 years ago today.

When I moved away from Lisbon Falls, I started asking myself minor existential questions; things like “who am I?” and “where do I come from?”  Before i-phones made it easy to copy a photograph, preserving archival images was expensive and complicated.  In my quest to “know myself,” I had my grandfather’s photograph reproduced and framed.  It sits on my own bureau here at The Coop and I look at it every day.  Sometimes when I feel lost, I pick it up and say “O’Pa, where am I going?”

Trying to understand World War I is like asking someone “what is the meaning of life?”  I asked my friend Reggie Black if he could provide me with “something meaningful” about this war over the weekend; he is a great authority on many topics, but this seemingly simple query was met with the following response:

“What do I need to know about subatomic particle physics to write about the end of the universe by Monday?  Jiminy, not an easy question.  The first thing I point you to is Erich Maria Remarque’s All Quiet on the Western Front.  But the majority of Germans didn’t see it that way, not at all.”

Reggie is correct; it’s complicated.  World War I was the end of many things and the beginning of many other things.  A person would need to understand The Holy Roman Empire, Prussia, the divine right of kings, and nationalism, for starters.  Archduke Franz Ferdinand of Austria was assassinated in Sarajevo on June 28, 1914; this event sparked a fire that had been smoldering for many years.

At that time, the German Empire consisted of kingdoms.  Michael Baumer lived in the Kingdom of Bavaria and was loyal to King Ludwig III, the last king of Bavaria.  Since there was no “president” to initiate a draft, each German kingdom supplied soldiers independently to the Imperial German Army.  It’s likely that my grandfather was “mustered” when he was 17, so he would have entered the war in 1916.

My grandfather never talked about the war.  What minimal information I collected was mostly passed down from my father and my uncles.  I don’t think my grandfather asked anyone “where am I going” as he picked up his cowhide pack and gas mask.  He was going to France, for his King and country.  I don’t know how much action he saw; only that he was taken prisoner by the French.  Being a prisoner of war probably saved his life because the two constants of The Great War were brutal death and destruction.  Some estimate that close to 2 million German men died in battle and more than twice that number were maimed and wounded.

My grandfather never talked to me about what it might have been like to trudge through the mud and blood of a foreign country with a heavy pack on his back when he was 17 years old.  I tried to imagine it one day; I put 20 pounds worth of cans and water bottles in my knapsack and hiked about five miles.  It wasn’t easy, but it wasn’t impossible.  Just the act of doing it seemed meaningless and first-world stupid, though.  It reminded me of a question a friend had asked me about my infatuation and nostalgia for the past.  Couldn’t I see that we were living in the very best of times?  There were no soldiers running all over our country, blowing things up.  I was free to walk, drive, and travel by train without asking anyone’s permission.  I had access to the equivalent of the Ancient Library of Alexandria in my i-phone.

While I was marching down one of the Seacoast’s suburban roads and tossing these thoughts and questions around in my mind, an old truck drove by; the bumper sticker said “My granddaughter is in the United States Air Force.”

“My granddaughter is a farmer who believes in peace, by jingo.”

This entry was posted in Home and tagged All Quiet on the Western Front, Bavaria, By Jingo, peace, The Great War, The Last King of Bavaria. Bookmark the permalink.

4 Responses to The Soldier