As a writer, I struggle with the “passive voice.”

Recollect, a transitive verb means “action” between a subject and an object.

Clapton is the subject, the sheriff is the object.  “Shot” is the “action.”  The sentence conveys who did what to whom in the “active” voice.

“The sheriff was shot by Clapton” is another way of writing the sentence and it tells the story in a different way, what was done to whom by whom in the “passive” voice.

I don’t know why I struggle with it so; it’s become a habit, I guess.  Occasionally, I send Reggie word snips to critique and without fail he snips back “get rid of passive voices and find stronger verbs.”  Reggie is not the only active voice advocate;  William Strunk, Jr. and E.B. White, in their book The Elements of Style state “The habitual use of the active voice, however, makes for forcible writing” and “…when a sentence is made stronger, it usually becomes shorter.  Thus, brevity is a by-product of vigor.”

This is not a treaty on writing.  My preoccupation with the passive voice made me think about spectator events and whether all spectator events are passive.  Over the weekend, I observed two spectator events:  a live local symphony orchestra performance and a televised football game.  Both appear passive.

“The symphony was attended by three hundred and fifty men and women, including me.”

“The AFC Championship game between the Broncos and the Patriots was viewed by over 40 million men and women, including me.”

Horrible passive voice sentences!  But are both events equally passive?

I disdain Tee Vee; readers of this blog know this because I’ve written about it many times in the past.  I don’t call it “television” or “TV” by design because I think “Tee Vee” is an appropriate diminutive expression.  Tee Vee’s vigor needs to be diminished.  Not having a Tee Vee for fifteen years gives me perspective; I hear and see marketing voices and all manner of vapid detritus lobbed at passive viewers when I do watch.  I’m not opposed to sports.  I’ve gotten out of my comfortable chair, gotten dressed, and traveled long distances to attend sporting events.  After the initial and enormous spectacle’s breathtaking assault on my senses, I took my passive spectator seat, with pleasant companions providing engaging conversation, sports insight, and laughter.  We may have glanced at the Jumbotron from time to time, but there were fewer distractions and no overt commercials to interrupt the sporting experience.  Passively experiencing football, yet actively engaged with others.

On Saturday night, I had a different engaging spectator experience.  I went alone to the Midcoast Symphony Orchestra’s performance at the Franco Center in Lewiston, Maine.  The talented orchestra’s production, the second of their season, was three works by Beethoven, including the Egmont Overture, Op. 84.  It was a snowy night but the hall was close to capacity.  I’m not an expert on classical music, but I listen to it often on either local classical radio stations or on BBC Radio 3 over the web.  Some people consider classical music as an “elitist” thing; I may have thought so when I was younger, but now I’m looking for something hiding in the music.  I listen to it and study the artists and the times they lived and I learn things. 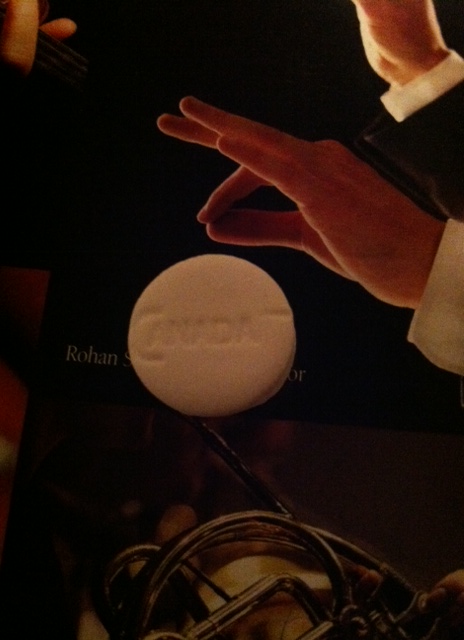 Yes, I have learned many things about other times and places by listening to classical music.  It engages me out of passivity.  Sometimes, when I’m walking on The Farm, I think about history and music.  I look at an old tall tree and wonder if my grandfather ever heard Beethoven’s music while growing up in Bavaria.

Prior to Saturday night, I had heard the Egmont Overture many times.  It’s a recognizable piece of music.  I didn’t know Beethoven wrote it as incidental music for the Goethe play, Egmont.  I didn’t know much about Egmont, a real player on history’s stage.  I didn’t know Beethoven’s thoughts about Napoleon.  My program guide provided a brief summary.  I listened closely to the music as it was performed and I watched the performers as they played their instruments passionately and vigorously.

The hall was alive and active.

I enjoyed the performance and even though I went by myself, I wasn’t alone in the hall.  I was engaged by the music, the artists, and people in the audience.  I may have dozed during Symphony No. 7 in A Major; it was growing close to my bedtime and was no reflection on the music.

Is there a difference between televised spectator events and live events?  Does the type of event matter?  When I contrast the symphony with watching yesterday’s painful Patriot defeat on Tee Vee, something seemed different.  My personal anecdotal evidence may not convince anyone.  Decide for yourself.

The Midcoast Symphony Orchestra will perform an all-Russian program of music on March 15, 2014.  It won’t be televised.

For what it’s worth, Clapton did not shoot the deputy.