What is it about “Groundhog Day” that is most offensive? Is it that the garden-destroying rodent is elevated to Zeus-like status for poking his ugly head out of a burrow on the second day of February? Or is it that Punxsutawney, Pennsylvania’s economy now subsists on a hope that people will flock to the town to see a rodent? Once upon a time, the Pennsylvania town had factories, foundries, and mills. Now, they’ve only got Phil.

Could it be possible that Peyton Manning was distracted by the shadow puppetry of a groundhog yesterday as the Seattle Seahawks soundly defeated the Denver Broncos in the American spectacle called The Super Bowl?

There are other ways to know which way the wind blows when it comes to weather and seasonal prognostications. Here in New England, one need only drive around on secondary roads for a few minutes. Sometimes the “groundhogs” are advertised by a sign on a telephone pole.

New Hampshire, a state more economically prosperous than Maine, is always prompt in posting their “groundhogs” in February.

I’m not a scientist or a weather puppet, but my observations are sometimes accurate. So I propose experts and marketers use frost heaving and secondary road speed decreases as a way to predict winter’s end. Small towns could have competitions to see which ones had the most frost heaves and bumps. Unemployed men and women could park lawn chairs by particularly heinous heaves and measure vehicle speeds with radar guns provided by local police departments. The results, telegraphed in staccato-like reports over radio, Tee Vee, and social media, would be part pseudo-science, part entertainment, and part economic development.

There would be tee-shirts and commercials and…MONEY!

Meanwhile, in the little village of Head Tide, Maine, I saw very few frost heaves. I went there on Saturday to see Edwin Arlington Robinson’s birth home and complete the “research” from last Sunday.

The house, located at 66 Head Tide Road, is currently for sale for a cool $225,000. It sits pleasantly along the Sheepscot River, only a short walk from what remains of the old Head Tide Dam and the former general store, now The Wizard of Odds and Ends and Antiques.

There aren’t many frost heaves in Head Tide and there isn’t much traffic. No groundhogs, either. I parked my Jeep by the old dam and walked around the village. I walked up one hill and peeked in the windows at The Old Head Tide Church. Then I walked over the bridge, around the corner, and made my pilgrimage to the Robinson house. 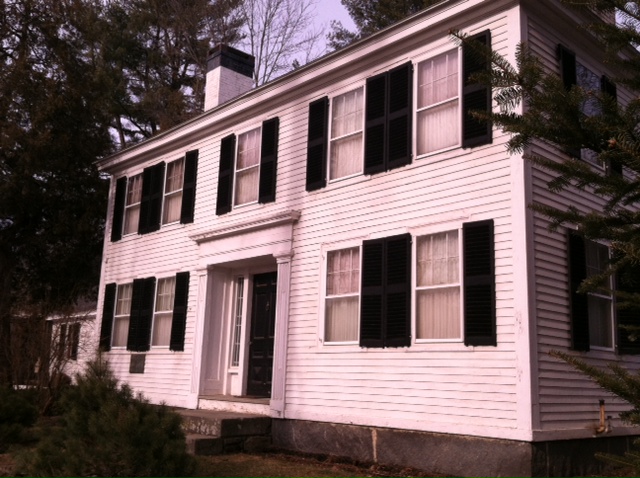 The weather being pleasant, I turned around and headed north up Head Tide Road, climbing a steep hill for about half a mile. No sidewalks, but since there were no frost heaves, no traffic, and no groundhogs, it was no problem. Halfway to the top of the road sat a stately brick home. 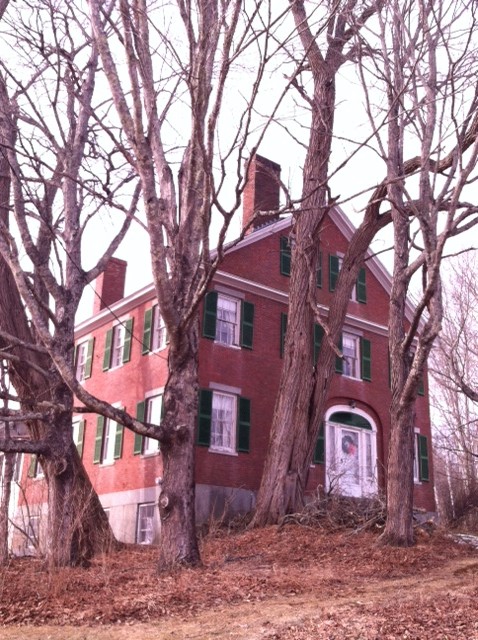 No signs of life.

I wondered if anyone lived in this house. There were summer sheers in the windows, aged but with only one obviously disintegrating. Someone had placed an artificial Christmas wreath on the front door. Was it this year or five years ago? It was a house built for stories, afternoon tea, and horse-drawn carriages. A house for another time.

I wondered what it might be like to live in such a large house on a hill. Edwin Arlington Robinson wrote a poem about this once.

When I got back to the dam, I smelled something fresh. It smelled like ice, dirt, and grass. It was refreshing and I wondered if this, too, was a harbinger of spring. Walking around and smelling it was much lovelier than watching a big old brown rat crawl out of a hole.

The funniest thing was I smelled that same smell again when I got home, right in my own driveway. I hadn’t needed to go anywhere or do anything to observe the signals of the seasons in the natural world. I didn’t need to travel to Head Tide or Punxsutawney at all.

Can anyone make a commercial and a tee-shirt out of that?

8 Responses to The Old Heave Ho