Where Credit is Due

I’m not a woman who spouts off motivational quotes at the first sign of a problem.  I’m not saying certain combinations of words aren’t helpful, though, and the following two quotes are probably the ones that have helped me the most in my life:

“You can have everything in life you want if you will just help enough other people get what they want.”  Zig Ziglar

“It’s amazing what you can accomplish if you do not care who gets the credit.”  Harry S. Truman

Now let me tell you a little story.

About a month before the Moxie Festival, my friend Alan stopped by and told me our beloved fourth grade teacher, Vida Hunnewell, was going to have a milestone birthday at the end of July.  She would be turning 85.  Alan wanted to do something special for Mrs. Hunnewell and I thought it was a good idea too.  My plate was pretty full but I really wanted to help Alan plan something so I said “let me think about this.”

One thing I knew about Mrs. Hunnewell is that she loves her church, the Lisbon United Methodist Church on School Street.  I used to see her briskly walking from her house to church on Sunday mornings or working at different church functions like the Christmas fair.

Another thing I knew was that the good men and women at the Methodist church give really fantastic parties.  So I sent a note to the wife of a classmate and told her about Mrs. Hunnewell’s birthday.  She told her mother and one of the church committees discussed it and voila!  A party was in the works!

Sunday afternoon was marred only by a sudden thunder shower; it was raining cats and dogs and goats around 2:00 p.m.  A rush of umbrellas crowded the door and we packed into the church basement.  Our fourth grade class even had our own children’s table.  When Mrs. Hunnewell got there, she was so surprised, she started crying.  Then she composed herself and greeted everyone. 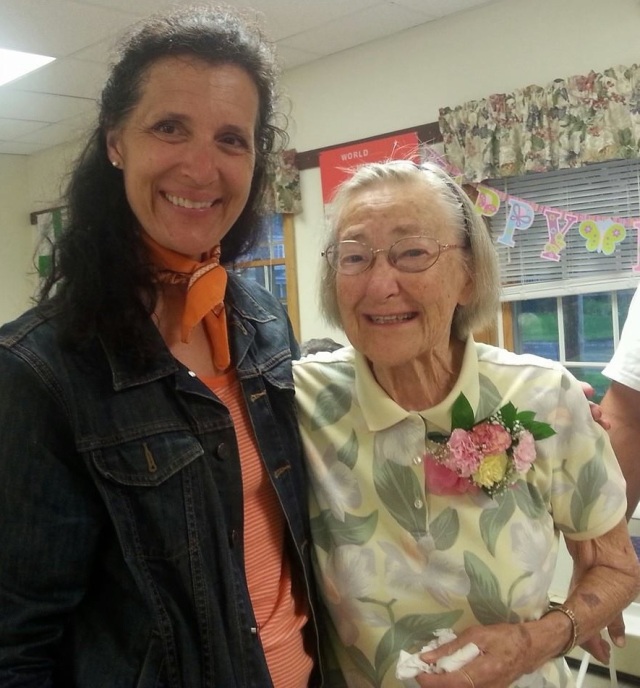 What a great party it was!

After the party, pictures were posted and comments were made on Facebook.  Alan posted a comment and thanked me and it got me thinking about the fact that I actually hadn’t done anything.  It was all Alan’s idea because he was paying attention when Mrs. Hunnewell told him her birthday was coming up.  I know Alan Thomas doesn’t care about getting credit for creating a boatload of sunshine for Mrs. Hunnewell, but in this case I want to give credit where credit is due.  It was all Alan’s idea and I was just part of the sunshine delivery device.

Motivational quotes are nice and all, but without action, they’re just more gas.  We really don’t need any more bloviating gas bags in this world, right Alan?

So go out there today and do the work in front of you, without concern about ribbons and trophies.  Just help someone else and who cares who gets the credit for it.

And a very happy 85th birthday to Vida Hunnewell!

This entry was posted in Abundance, Home and tagged Alan Thomas, Altruism, Harry S. Truman, These are not random acts of kindness, Vida Hunnewell, Zig Ziglar. Bookmark the permalink.

3 Responses to Where Credit is Due