I think I’ll write another blog post about “life getting back to normal after The Moxie Festival.”  Why not?  If you read last Thursday’s post, you probably thought things were all “spic and span” here in Moxie Town and it was full steam ahead to “summer in Vacationland.”

That would be sort of true, but not quite.

Handy suggested we go to the Yarmouth Clam Festival Friday night and so after work we raced down Route 9 and got there in time for the parade, which starts at 6:00 p.m.  It was a wonderful parade; I had forgotten how much I love such small town spectacles.  I didn’t see this year’s Moxie Festival Parade because I was setting up for the Recipe Contest.  The Clam Festival parade had floats, retired baseball players in vintage cars, and marching bands.  The last vehicle in the parade was Erv Bickford’s Royal River Band Wagon.  The sign on the side of the truck said “In Memory of Erv Bickford” and I remembered all the times Mr. Bickford had driven the band wagon in The Moxie Festival Parade.  One year, I snapped this picture of him in the “parade after the parade” that goes by Uncle Bob’s house. 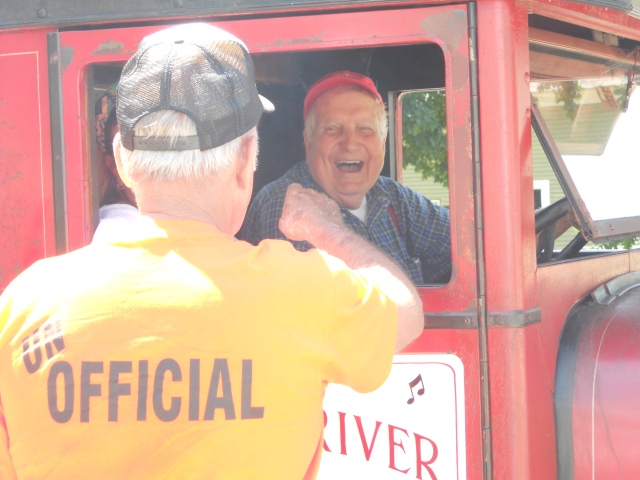 Can you beat that smile?

He died in 2012 and you can see he lived his life with Moxie; what an inspiration it is to read about his life and all the wonderful things he did for the town of Yarmouth.

On Saturday, after waking up in a panic wondering what I was supposed to do and where I was supposed to be, I started collecting my household garbage and recycling for a trip to the dump.  There were more summer things to do that evening, with a trip to an art gallery in chic Kennebunkport.

On Sunday, I took a trip around my gardens and took down the red, white, and blue buntings at the gazebo.  It was hot, sticky, and threatening.  We had a rain shower while I was in Uncle Bob’s gardens, but I managed to pick enough peas for dinner.

Then off to the first “Concert in the Park” at the MTM Center to hear Whiskey Militia.  Handy, his friend Bill, and I were shelling peas while we listened to the music until the sky got very dark.  An intense thunderstorm hit and the three of us ran for shelter, which just happened to be my parents’ car.  Herman and Helen were in their usual spot.

Rain, thunder, lightning! It was exciting and after I got home, I ran around the dark backyard in my bathing suit.  It was the perfect ending to a perfect weekend of “life getting back to normal after The Moxie Festival.”

And now it’s Monday again.  Hot and muggy, so they say.  I’d better get going.  Ah, summer in Maine.

The way life should be.