Shout Till The Rafters Ring

I’m no meteorologist, but it seems like we are in some strange and unsettled weather pattern here in Maine.  One day will be fair and hot; the next day is cloudy and cool.  Then the humidity rolls in until a thunderstorm breaks through.  There was a funnel cloud seen here in Lisbon Falls, too, at the same time it was a beautiful day in another part of town.  But like I said, I’m no meteorologist.

I was holding my breath Saturday, wondering how I should dress for the “Night at the Light” concert at Portland Head Light.  My Moxie BFF Gina Mason invited me to go before the Festival.  It was a treat to spend time with her and not talk about Moxie, except that we did talk about it from time to time and we also brought some of our festival paraphernalia and a small cooler full of the distinctively different beverage just in case we had an opportunity to promote the event and the beverage.  Always Be Promoting Moxie is our motto, or ABPM for short.

Naturally, after we set up our “picnic spot,” a lady said “they still make Moxie?”

“As a matter of fact they do and it’s better than you might have remembered it from the days when you first tasted it.  Can I pour you some?”

Out comes the stylish orange and blue can and an orange solo cup.

In less than 5 minutes, we had half a dozen concert-goers enjoying the beverage before the Portland Symphony Orchestra took the stage and conductor Robert Moody was called “to the pit.”

It was a little chilly at the Headlight, almost as though the concert was taking place inside a fog bubble.  But it didn’t matter.  The program of music was lovely and diverse.  There was a nod to true symphonic music with Haydn and Prokofiev.  There was “movie music” like the Star Wars and Chariots of Fire themes.  It rousing, to say the least.

But what caused a little stir in my heart as I looked over the program was the third from the last song.  The Maine Stein Song! 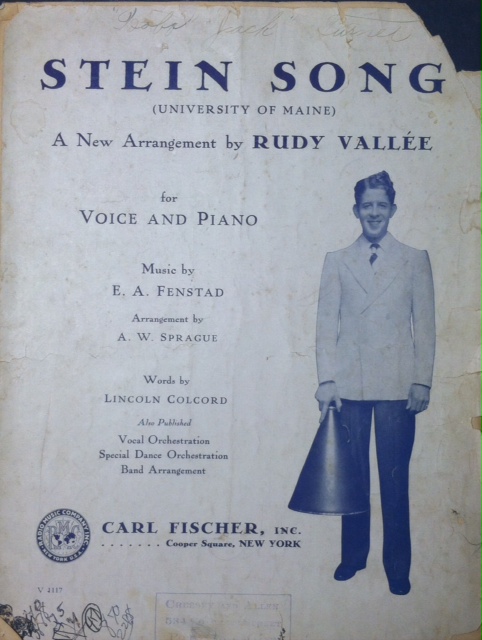 According to Wikipedia, “hundreds of colleges have fight songs, some of which are over a century old.”  The Maine Stein Song is well-known among such anthems; you can read more about it here.

I went to the University of Maine and maybe that’s why I love the Stein Song so much.  It’s all wrapped up in youthful memories of football and beer and hockey games and friends.  Whenever a Maine team would score a goal, there would be the trademark introductory toots, serving as the cue for everyone to stand and start clapping.  If you knew the words to the song, you sang along.  A fight song couldn’t have a better ending than “the college of our hearts always.”

It’s been a while since I’ve been up to the college of my heart always and I waited anxiously as the orchestra played through their scheduled songs.  The assistant conductor introduced the anthem and said we were welcome to clap along and sing the words if we remembered them.  Then the orchestra began and about a third of the audience of 5,000 rose on the old familiar cue and I stood with them.

Stand and drink a toast once again…

These days, most of my toasts are made with Moxie and that’s not a bad thing.  Thank goodness for memories and music and Moxie and Maine.  Indeed, the way life should be.