Readers will be shocked when I tell them I volunteered to work on the “September Showcase” at the local library.  What is one more thing to do?  I was curious about The Moxie Festival’s history and I enjoy spending time at the Lisbon Historical Society so I told the librarian I would “install” an “exhibition” on Lisbon’s festivals.  The exhibit space is a small glass showcase, approximately three by four feet.  A little fabric, some pictures, tell a story.  No brainer for the girl who made a watermelon seed necklace, right?  Oh, wait, I’ve never told you that story.  I will.  And I’ll  tell you more about the showcase when it’s done.

In preparation, I’ve spent a few hours at the Historical Society every Thursday afternoon.  It’s my kind of thing, hanging out with a bunch of old newspaper clippings, books, and ancient artifacts.  My former high school English teacher, Mr. Ricker, is usually there too.  I mean Merton.  When I started my research a few weeks ago, Mr. Ricker told me I couldn’t call him “Mr. Ricker” anymore; it took me a week to get up the courage to call him by his first name.  Should I say “Hi, Mert?”  Or maybe “Good afternoon, Merton?”

“Hello, Merton,” was how it awkwardly came out on the first try.

It’s a pleasant weekly afternoon break from my work for pay.  I’ve learned a lot of facts about our town and the families and friends who’ve made Lisbon Falls my favorite place.  Because if the place you’re living in isn’t your favorite place, you’re lost.

For instance, did you know that I’m not the first Baumer to host a food event during a major town festival? 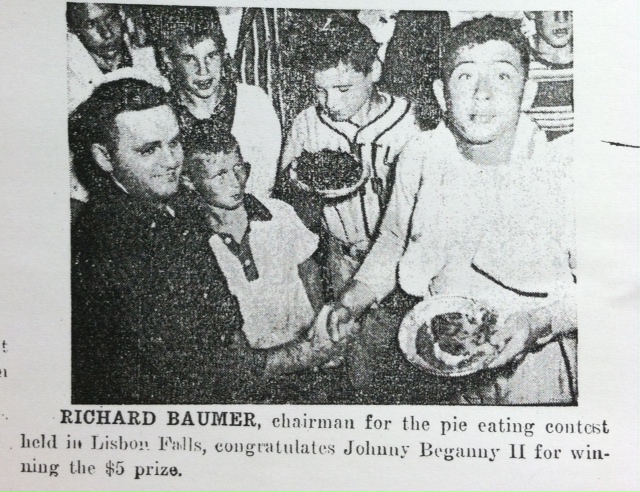 That’s my uncle Richie (the barber) on the left, hosting a pie eating contest during the 1958 Frontier Days.

The expenses for that festival were $406.36.  The Weekly News reported on August 14, 1958 “an estimated 10,000 persons witnessed one of the most colorful parades ever to be staged in the Lisbon Villages…when the Lisbon Junior Chamber of Commerce unveiled the highlight of the Frontier Days celebrations.  Almost one and a half mile long, the parade was seen in Lisbon and Lisbon Falls by local and out-of-town folks.  Comments were unanimously favorable…”

After I finished my weekly research, I got a hug from Historical Society’s Secretary and Treasurer, Dot Smith and I trudged home to see what professional calamities might have developed in my 90 minute absence.

Let’s say it was a day and when I finally finished, I knew I needed to be in Uncle Bob’s garden with the ghosts of my grandfather.  Handy lives on the way there, so I knocked on his door and dragged him along.  As we rounded the corner, Uncle Bob came out to roll up his truck windows.  We all went into the garden and Uncle Bob started telling us about raccoons in the corn and disappointing pumpkin yields.  Then he and Handy wove their way through the corn rows and picked a few ears.  I picked some tomatoes and pulled a few plants that were spent.  Then I climbed up the ladder in the barn and brought down a bunch of dried garlic.

That’s Handy in the corn, sort of like Field of Dreams.  I didn’t ask his permission to post his picture on my blog.  You can’t really tell who it is, can you?

Sometimes I text Handy before I fall asleep, memorializing the day or composing tomorrow’s thoughts.  It’s probably tiring for Handy, especially on a full stomach of corn, tomatoes, and beer.  I was texting him something about the loveliness of walking a few blocks to pick our dinner and how my whole extended family has been eating from that garden our whole lives and how we probably ought to get a heavy load of manure onto the garden this fall.  Believe me, the bulk of the texts are from me.  Handy’s a good “listener.”

Then there is the signal that he’s tired and maybe just a little bit tired of listening.

What else can I say?

This is my life; after two year’s of adjustments and getting used to the change, it’s almost exactly the way I imagined it would be.

I wouldn’t want it any other way.

7 Responses to Go to Sleep Now…