In case you didn’t know it, Maine is a “foodie destination.”  The brightest food star is Portland with a Wikipedia entry for the city that includes a lengthy subsection on food and beverage.  Search “restaurants in Portland” on the Maine Restaurant Association’s directory and you will find 425 results.  Sure, some of those are pizza places like Amato’s, national chains like McDonald’s, and the Mercy Hospital Cafeteria.  Nevertheless, Portland is a dazzling concentration of places to eat and drink.

Outside of Portland’s restaurant scene, there are “Foodie Tours” featuring stops at up and coming food locales like Bar Harbor, Kennebunkport, Rockland, and Camden.  When Portland chefs get tired of Portland, they go “off griddish” and move to Lincolnville.  (Think neo-Amish bearded chefs with tattoos and man buns.)

If you’re brave enough to explore the state’s gastronomic outliers alone, not only are there restaurants, there are food festivals all the year round.  We celebrate lobsters, clams, potatoes, blueberries, apples, maple syrup, and beer.  Did I miss anything?

Want to cook your own food?  No problem.  We’ve got four season farmers and markets.

Cooking schools and classes, too.  Google it yourself if you don’t believe me.

I almost forgot to mention the food writing.  Zest magazine publishes a gorgeous composed salad of food articles and photography every two months.  Pick it up; it’s usually free at their advertisers; I’ve found it gratis at “Now You’re Cooking” in Bath or “The Cheese Iron” in Scarborough.  Sometimes the writing is a little over the top, like an article about the Riverside Butcher Co. in Damariscotta in the January/February 2017 issue.  The piece’s accompanying recipe for “Stuffed Butterflied Loin of Pork Provencal” begins by instructing “ask your local artisan butcher to butterfly a boneless pork loin to make this rustic classic.”

How many artisan butchers are there in Maine?  I don’t think the Bisson family in Topsham would necessarily answer in the affirmative were I to ask “are you an artisan butcher?”  They’ve been doing the meat thing as a family now for 85 years, more or less.

For the Bisson’s, good food isn’t art or a fad, it’s just a Maine family tradition.

I do a little food writing myself.  It’s been a boon to my writing that Handy is a great cook and I’ve been able to toss food and food story ideas around with him.  I love it when I bring home something groovy from the farmers market, like locally grown and ground cornmeal and Handy watches three or four YouTube videos on how to make a perfect corn dog.

You know what they say…man does not live by corn dogs alone. 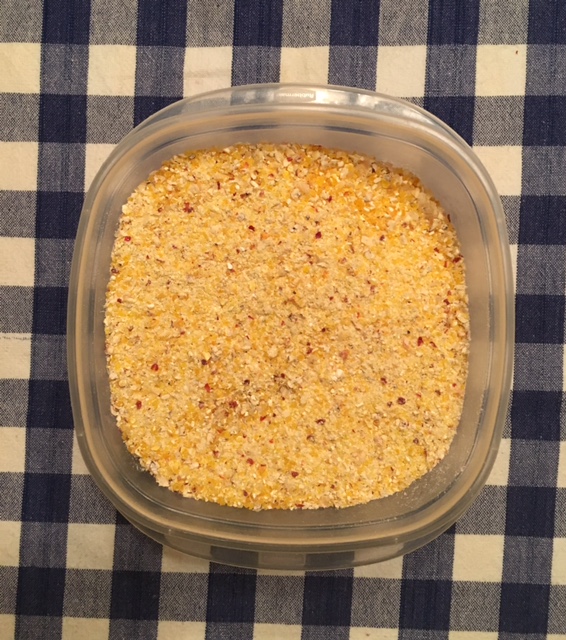 Last night was one of the coldest nights of the winter, so cold I heard a “frost quake” around 1:00 a.m.  Since we’re stuck in January for another 3 weeks, I splurged on a bag of Florida oranges to brighten up a menu which is heavy on cabbage and root vegetables right now.  I pulled a turkey out of the freezer and I’ll roast it in some old-timey Joy of Cooking way.  It will be turkey this and turkey that for the next few weeks.

Food…to sustain our lives and make our hearts glad.

This entry was posted in Cooking and Food and tagged cornmeal, Fairwinds Farm, Joy of Cooking, L&P Bisson and Sons, Maine is a foodie destination. Bookmark the permalink.