The Chimes of Time

The John Marshall and Alida Carroll Brown Research Library, tucked away behind Portland’s Longfellow House, is a treasury of books, manuscripts, photographs, and ephemera. 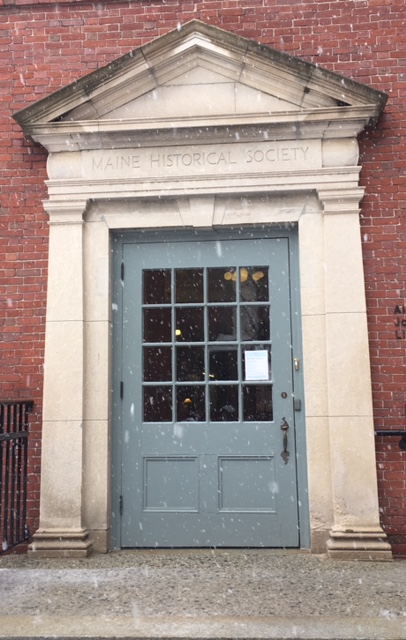 Many of the library’s visitors come to do genealogical research.  A video posted on the library’s website tells the story of a member who initially visited with a goal to establish the lineage necessary to become a member of the Daughter’s of the American Revolution (DAR).

The DAR was founded in 1890; this was a time of patriotic revival following the United States’ Centennial.  It was also a period that witnessed the explosion of women’s clubs.

To join the DAR, a woman 18 years of age or older is required to prove lineal, bloodline descent from an American Revolutionary War ancestor.  Various types of war service is considered acceptable, including military or naval service performed by French nationals in the American theater of war.

I’ve never thought much about the DAR; I don’t think I’d be qualified to join, but you never know.  There might be a French sea captain somewhere in my lineage.

The library at the Maine Historical Society has a mantel clock which chimes the quarter-hour.  In my hurried visit last Saturday, I didn’t actually see the clock and the chime is unassuming.  Not an echoing bong or a celestial gong.  Just a gentle chiming sound, reminding those in the library that time is marching on.

Ding.  You know the drill.

This entry was posted in Back to School and tagged Daughters of the American Revolution, Maine Historical Society. Bookmark the permalink.

2 Responses to The Chimes of Time