We Can Still Live Well

A few weeks ago, I shared a news report that the General Henry Knox Museum (also known as “Montpelier”) in Thomaston faced a financial crisis and possible closure.  A blog reader sent me an update on that story and you can read it here.  According to the Bangor Daily News, the last-minute funding campaign generated enough donations for the museum’s board of directors to comfortably keep the museum open for 2018 season.  The article said “the board asked its executive committee to devise a plan to restructure the financial operations of the museum in an attempt to make the museum more financially viable.”

I’m pleased to learn donors stepped into the financial gap for Montpelier.  It will be on my list of day trips this summer and it should be on yours, too.  If you’re within 100 miles of Thomaston, you can combine your trip with a visit to Linda Bean’s Wyeth Gallery in Port Clyde.

Not all things end well for museums, though.

In 2016, the American Textile History Museum (ATHM) in Lowell, Massachusetts closed.  After 50 years, they faced a financial deficit they could not overcome and a decision was made to shutter the museum.

I visited ATHM in 2002.  I lived in New Hampshire and the reasons for visiting Lowell are foggy in my mind.  It was an impressive archive in a grand space.  I was not a history hound like I am now and my superficial response to the visit disappoints me in retrospect.  I was displeased that the archive had a very unsatisfactory café; I found myself wondering why a museum dedicated to the preservation of textiles even needed a café.

The closure of the museum was handled with great skill and care.  The majority of ATHM’s Osborne Library was transferred to the Cornell University Library.  Various collections were disbursed to other relevant museums; a number of artifacts ended up at Museum L-A in Lewiston and the Androscoggin Historical Society in Auburn.  Sun Journal writer Mark LaFlamme interviewed Musuem L-A’s Executive Director Rachel Desgrosseilliers about the artifacts now housed in Lewiston; four truckloads, including working looms, spinning wheels, and even every-day things like shelving and mannequins.  The article also mentioned something else ATHM provided to Museum L-A, something as equally important as tangible materials.  According to the article, Museum L-A’s board of directors “also gained a lot of fresh knowledge from ATHM Executive Director Todd Smith, who agreed to speak…about the issues that ultimately doomed the museum in Lowell.”

I, too, wonder what ultimately doomed the museum in Lowell.  Kudos to Museum L-A’s executive director for being curious about the circumstances surrounding the demise of the ATHM.  And here’s hoping the board of directors at the General Henry Knox Museum seek out similar wisdom as they assess how to make the museum viable. 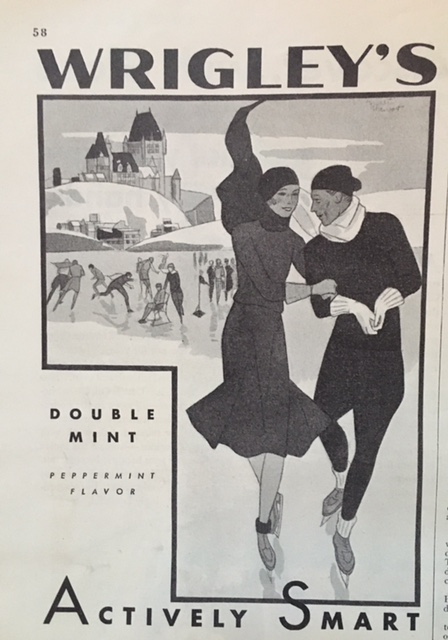 Let’s skate hopefully into February, courtesy of a Wrigley gum advertisement from the February, 1931 issue of the now-defunct Delineator magazine.  January is cold and depressing; the third rail of seasonal doom.  Resist the rail of doom and cozy up in a local museum, library, or historical society.  Truth, beauty, and warm notions of living well are everywhere, contrary to media caterwauling and cacophony to the contrary.