The less I have my hands in the dirt, the more stress I have in my life.  I haven’t done any scientific testing, but for me there is a correlation between the amount of time I spend breathing outside air, stomping around in the dirt, and my stress level.  Trees, dirt, and running water mean more peace, freedom, and tranquility.  Running around, pecking at paper squares all day, trying to be all I can be mean more stress and anxiety.

Oddly enough, I am sometimes at peace in my Jeep.  Maybe it’s because I’m not “wired” when I’m driving.  In 2008, I ran up a hefty cell phone bill calling my elected representatives, telling them what I thought about TARP 4EVA, QE1, and QE2.  They weren’t in my network, I guess, so after I paid my bill, I ditched my cell phone.  Although my friend Jaxon sometimes says “it would be nice if you had a cell phone” I just shake my head and say “not this month.”  My Jeep is a little phone-free oasis of peace and relative quiet.  Sometimes I listen to music and sometimes I listen to sports talk radio; most of the time I daydream about growing lettuce, tomatoes, and famous farmers I would like to meet.

My drive to the office yesterday was especially dreamy.  I stopped at the Rye Beach Post Office to pick up my mail and I had lots of it.  Most importantly, the seed potatoes I ordered from Wood Prairie Farm in Aroostook County, Maine, had arrived. 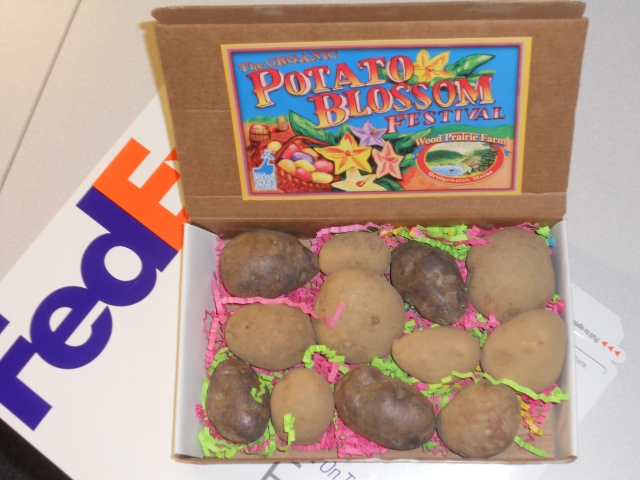 Please don’t laugh at my little package of potatoes.  They’re going to be just right for a 4 foot square in my Hampton Victory Garden plot.

I had first learned about Wood Prairie Farm a few years ago when I started doing research about good places to ride out the apocalypse.  Then, I heard Jim Gerritsen speak in Exeter, New Hampshire in February of this year.  He’s the owner of Wood Prairie Farm and the president of the Organic Seed Growers and Trade Association (OSGATA).  This organization is doing important work to keep our seeds safe for the future.  He seemed like the real deal so I decided to buy some seed potatoes from him.

The potatoes would have been enough to fill the 20 minutes of day dreaming my drive provides, but I also got a card from an agrarian writer I had shyly written to about blogging and kale.  He had read my blog and he wrote to tell me so; I was flattered and humbled that he would condescend to read my work, let alone write to tell me about it.  He’s the real deal, too.

Before I knew it, I was almost at the office.  I stopped at a red light and looked in my rear view mirror, noticing that I was being followed by a fleet of Federal Express vehicles!  Every morning at a little after 9:00 a.m., all the Federal Express trucks of all sizes and varieties leave their facility at the same time and head out into the world to deliver important things.  It looks almost like an army on the move and today, I was right in the middle of their maneuvers.

Although my Jeep can hold its own on the highways and byways of this world, it’s still a little unnerving to be stuck in the middle of a bunch of big white vans and trucks.  They were all speeding up and jockeying for position.  One of the drivers was eating a Yoplait yogurt and another one was smoking a cigarette.  I’m glad they were polite Fed Ex drivers and not civilians; none of them were honking at me to get out of the way or flipping me the bird.  But there was a sense of acceleration and I thought I might be trapped in their convoy.  I started to imagine I might be pulled along with them, unable to extricate the Jeep out of their motions.  I squeezed over to the right hand lane and made my turn onto the Pease Tradeport.

For a split second, I almost thought I was having one of my weird dreams, but then I heard WEEI’s Dennis and Callahan interviewing Doc Rivers about the Celtics playoff chances; I was awake and I was safe.

I’m going to spend a lot of time in my garden this weekend.  It won’t matter if I’m early or late.  In the garden, there’s no worry or stress and my potatoes aren’t in a big hurry to go anywhere.  My spinach and lettuce are sprouting up and from what I can tell, they’re right on time.

Slow down this weekend, ok?  Have some sweet day dreams; I’m counting on it.