Wood Prairie Farm is a family farm owned by Jim and Megan Gerritsen; they’ve been growing food organically for 35 years and specializing in seed potatoes. Jim is a distinctive-looking man, with a determined face and frame; his face was made to be chiseled in granite.

One January in my journey towards farming, I went to the Maine Agricultural Trade Show and Jim Gerritsen walked right by, probably on his way to a break out session on potatoes. I could hardly believe that someone who looked like a hard-working farmer on the internet looked the same way in real life. Farmers had become like rock stars to me.

This past February, Jim Gerritsen and one of his sons made the 5 hour drive from Bridgewater to Exeter, New Hampshire to give a talk about his farm, growing food, and his role as the president of the Organic Seed Growers and Trade Association (OSGATA). It was held at a restaurant and many of the attendees were not farmers. People identified themselves as “concerned citizens,” “mindful consumers,” and “landless homesteaders.”

Mr. Gerritsen’s talk was primarily about the work OSGATA is doing to protect small farmers from being sued by Monsanto for patent infringement. It is a very complicated thing. Imagine if your neighbor Tom had a show dog; we’ll call the dog Roundup. Roundup wasn’t on a leash and he came over to your house and bit your children. Your children were ok, but Roundup broke a tooth. Your neighbor Tom then sued you because Roundup couldn’t be a show dog anymore with his broken tooth.

It sounds crazy, doesn’t it?

I’ve simplified things, but that’s what has been happening in the farming world. One farmer will plant a crop of Monsanto’s genetically modified seed and if it ends up on another farmer’s property, Monsanto might sue the receiving farmer for “patent-infringement.”

It’s not easy being a small, local farmer, but they’re important and we need them. I try to support them. After hearing Jim Gerritsen speak, I decided to order some seed potatoes from him. I ordered them and they arrived in a little box, all gussied up with a pretty label proclaiming themselves to be “The Organic Potato Blossom Festival.”

Late this spring, I planted them. The instructions said “In a 4’ by 4’ garden bed, plant uncut tubers 3” deep, spaced evenly. Apply thick straw mulch around plants when 8” tall.”

I was nervous. My grandfather had grown potatoes and I had picked them, but I didn’t know very much about growing them. A gentleman at the Hampton Victory Garden had grown a row of potatoes once.

I planted the coin-sized seed potatoes exactly as instructed, after letting them “warm up” in my kitchen. After a few weeks, they sprouted and eventually grew up enough for their blanket of thick straw mulch. They flowered. For the last two weeks, I’ve been tentatively digging around and picking potatoes out of my little 4’ by 4’ potato bed. It’s amazing and encouraging to grow such beautiful and healthy food in a tiny little corner of a garden. 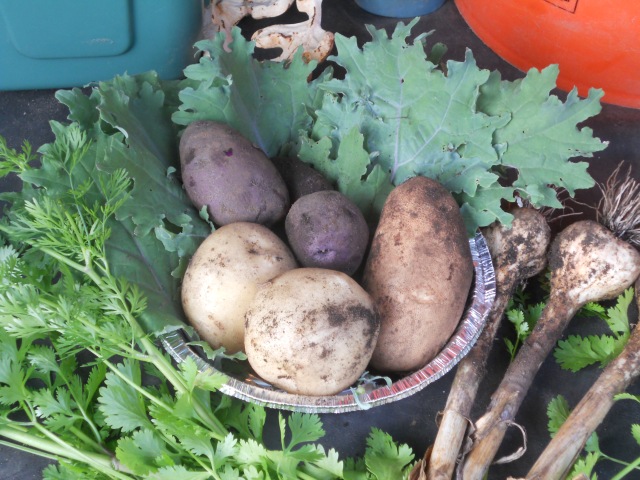 I don’t understand everything about the OSGATA vs. Monsanto lawsuit. I think of it as a “food sovereignty” issue and it affects us all. At the end of Mr. Gerritsen’s talk, people asked him what they could do to increase the safety of our food. He did not tell us to whip out our wallets and give to his cause; he humbly encouraged us to grow a little bit of our own food.

This entry was posted in Farmers and tagged Jim Gerritsen, organic potatoes, OSGATA, Wood Prairie Farm, You can grow food!. Bookmark the permalink.

2 Responses to Potatoes For Breakfast