Don’t Get Funny with Me

My father, Herman the German, is a funny guy.  He might have been the “class clown” in addition to being the “Carnival King of 1951.”  He jokes around a lot and sometimes I think he uses humor as a foil to deflect unpleasantness.  We all have our coping mechanisms.  One day, my mother asked him to either run the vacuum around or fetch something from the basement and Herman made a joke about it to postpone the doing.  Helen’s quick clipped staccato response was:

Naturally, I wrote the line down on a little scrap of paper and stuck it in my wallet for future reference.

It’s not my intention to write a blog post about my parents this morning.  In the last month, I’ve spent a number of hours doing research at the local historical society; the seriousness of knowing the past prompted me to use one of Helen’s lines as the title of my post.  Of course, there are many things “funny” about history; funny “ha ha” and funny “hmmm…”  It’s fascinating and every time I spend a few hours at the “archives” (as many affectionately call the Lisbon Historical Society) I come home with a new appreciation for men and women who toil away with yellowing newspapers, scraps of paper, musty books, and the old shoelaces of Miss Something or Other.

On Wednesday evening, I gave a talk at the “archives” called “In the Moxie Afterglow.”  The premise of the talk was that our little town had a long history of festivals and gregariousness.  I spent several hours prior to the talk reading old newspaper clippings dating back to 1885.  You see, this is called “primary source” information.  It wasn’t like I wrote an outline of my “feelings” about what might have happened.  I went searching for the words of someone who was alive at the time the events happened.  That’s not to say this information is perfectly accurate; from my own newspaper writing, I’ve developed a certain style which I know will pass through the editor’s sifter.  An unpleasant interview with a self-serving gas-bag might be written as “Gloria Gregory is a confident and successful entrepreneur.”

Still, there’s a pattern to the information nuggets to be panned.

Some people think the Moxie Festival began in the 1980’s and that’s factually true.  There were no festivals prior which were called “Moxie.”  But there was a July 7, 1948 news story about the Fourth of July celebration which looked like something I’ve seen in my lifetime.

This picture was taken outside what is now The Railroad Tavern.  To the left of the picture, outside the frame, is the soon to be demolished remains of The Worumbo Mill.

When I gave my talk, some of the attendees had actually been at the celebration and my own father had been on one of the parade floats.  I found his name among others in a newspaper clipping.  There was even an apocalyptic entry in the parade, based on this evidence:

“Rodney Starbird made a great hit with what is probably a note of economic prophecy.  Carrying a placard warning that hard times were coming, he walked inside a barrel.”

In 1958, our town had the first of what would be approximately two decades of “Frontier Days.”  The first event was sponsored by the local Jaycees and the Jaycee Wives.  One year, this local civic organization won a national award for community service by completing 63 projects.

I took a digital image of an old black and white glossy photograph of the first Frontier Days parade. 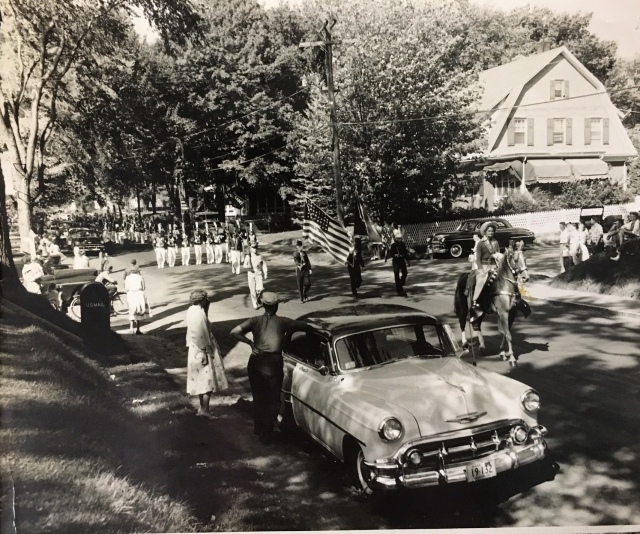 I’ve looked at this picture many times and the image is striking to me in so many ways.  But those are my “feelings” about the picture.  The facts:  the young woman on horseback is Shirley Christopher Ricker.  She was 23 years old at the time of the photograph and had graduated from the University of Maine at Orono with a degree in Home Economics the year before.  She was an equestrienne, known in Maine horse show circles.

I don’t know the identity of the other parade participants or the onlookers and I don’t know who took the photograph.

My talk traced the town’s history of festivals and celebrations, based on what primary source evidence I found.  I enjoyed the research and the Thursday afternoon visits to the archives.  There’s a serious quality to the information and one afternoon a friend texted me while I was examining an old newspaper.  I wanted to text back “don’t get funny with me, I’m at the archives.”

There are at least 100 historical societies in the state of Maine; they’re everywhere.  They’re usually open only occasionally or by request, but they’re incredible repositories of information.  I’m not sure if you can find Pokemon monsters there, but if you’re able to focus your attention for twenty minutes or more, you might find something different and informative.

Hot and humid today and that’s a fact.

This entry was posted in Friday Pillow Talk and tagged Frontier Days, Lisbon Historical Society, the arc of history, The Worumbo Mill. Bookmark the permalink.

6 Responses to Don’t Get Funny with Me