Here in New England, it has snowed for the last four weekends.  We had a blizzard, a snowstorm, and a Sunday storm.  On Saturday night, we got a coating of thick, heavy flakes.  The winter weather has caused much groaning and gnashing of teeth from people who should know better.  As Bill Belichick might say “it is what it is.”

As I was packing up The Jeep early Saturday morning, on my way home to Lisbon Falls, I smelled the sulfur-like smell of a skunk.  I haven’t smelled “skunk” since fall and I wondered if there was a particular skunk behavior which was a harbinger of spring.

The skunk is a nocturnal animal and while the use of their odorous spray is a weapon against predators, it’s also a way that a skunk marks territory and attracts a mate.  Doing some internet research and basic gestational math, I determined that male skunks could be out looking for mates about now and I thought it was as good a sign of spring as any.  Embracing the odor and the miniscule piles of remaining Seacoast snow, I headed north with visions of rhubarb popping through the dirt in the garden I share with Uncle Bob.

It was overcast and grey all the way home and a flake or two would occasionally hit the windshield.  When I drove by Uncle Bob’s, I was skunk out of luck; the garden looked the same as it looked a few months ago.

I took a walk around town, looking for skunk signs.

There were no signs of any tulips tips in the Redemption Garden.

It was a big rock candy snow mountain at my Surprise Garden.

There were no signs of anything skunky to be found.

It’s easy to be anxious in March in New England.  January and February are actually one long month which could be called “Fanuary” or “Jenebruary.”  Flipping the calendar to March isn’t a magic talisman, though.  It’s still early for most things and I estimate that it will be another 21 days before I can get outside and start cleaning up winter’s debris.  Folks are tapping maples and there are a few inside things yet to do before planting peas.

I’m going to have to be more upbeat and positive with the groaners and the teeth gnashers.  I know the Pollyanna routine will smell like a skunk to them, but I’m going to do it anyway because I did find one little hopeful sign of spring as I was leaving my parent’s house on Sunday. 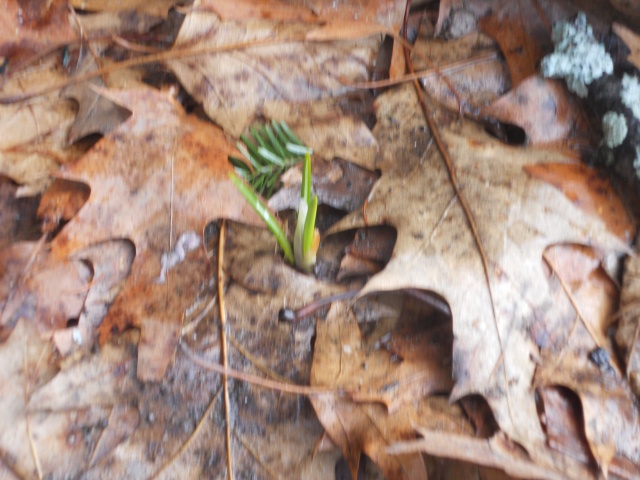 Be a harbinger of spring today; be a skunk.

This entry was posted in Weather and Seasons and tagged Bill Belichick, cool your jets, it is what it is, pounding skunk-shine, signs of spring, skunks, Winter weather. Bookmark the permalink.

5 Responses to Be a Skunk