Let’s Have a Party

Lilly Pulitzer, the Palm Beach socialite who designed bright and sunny fashions, was quoted as saying “That’s what life is all about:  Let’s have a party.  Let’s have it tonight.”  Ms. Pulitzer was the daughter of an heiress to the Standard Oil fortune and then she married into the Pulitzer publishing family.  With such credentials, giving a good party is a must.

I’ve never been to a Palm Beach party, but I do have a long Lilly Pulitzer dress I wore to a swanky party sixty stories above Boston a few years ago.  It was exciting, but to be perfectly honest, I always get nervous at big parties like this because I wonder if I really belong in such sparkling settings.  Even though Uncle Bob drove an oil truck all his life and my father worked in a paper mill that supplied paper to the Hearst Corporation, I’m no heiress.

To overcome my lack of credentials and party anxiety, I studied various techniques about mingling and making small talk.  Most of the books I read encouraged jittery party-goers to create a party personae or mask and then “just pretend” for a few hours.  A popular suggested pose was the “Holly Golightly.”  Wear a tiara and long black gloves, carry a cigarette holder, and act a little dippy.  “Voila!”  No party jitters.

I never implemented any of the techniques because they felt insincere and just as difficult as making small talk with new people.

No masks for me.

Over time, I realized what I liked most about parties was planning them.  When a person plans a party, they have a reason to move around a lot and not necessarily become frozen with terror or entangled with clinging vines.  Being the planner is like being a party point guard.  Bring the party down the court, line everything up, and pass the ball off to the guests when everything is ready.  Once the party starts, the planner runs new plays as new situations are presented.

No tiaras or cigarette holders are needed.

Before the big day, one or two of the invited guests might ask if there is anything they can do to help and the polite response is always “How nice of you to offer, thank you so very much, I think I’ve got everything under control.”  Remember, they’re the guests!  Once in a while, though, the offer of help is something too good to refuse.

For the last two months, my brother and I have been planning a surprise 80th birthday party for our father, Herman.  Our mother, Helen, was in on it, as was Herman’s old friend Mert, aka Herbie Blackstone.  Things were moving along beautifully.  Then, a week before the party, I had a voice mail message from another of my father’s old buddies, Noyes Lawrence.  He said he had blown up the childhood picture of my father used for the invitation and had made “about forty copies of it.”

“I’ve got a few ideas, but I want to talk to you about it first.  Call me when you get a minute.”

Both my brother and I chatted with Noyes and he described his idea.  We liked it right away and Noyes and his wife Rae got busy cutting and taping the “Hermie Masks.” 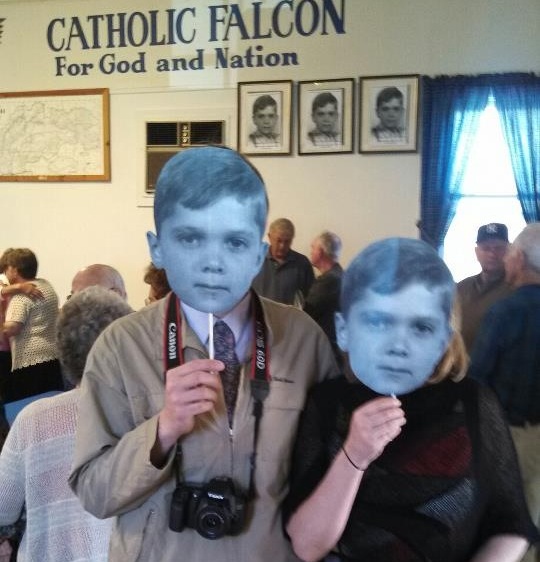 The masks were a lot of fun and my nephew, Mark, took pictures with almost every guest wearing one before the real Hermie arrived.  When we got the signal that Herman and Helen were on their way to The Club (Herman thinking he was attending another old friend’s birthday party) we positioned the mask wearers near the door.

It was a hoot and the only drawback was that we only had forty masks.

(Party planning note:  When creative guests like Noyes and Rae offer to supply forty Hermie masks, it’s not polite to ask them to double or triple their production.)

Life is about a lot of things, and having parties is one of many ways to live joyfully.  Once in a while, it’s even acceptable to wear a mask.

Let’s have a party!